Home » Rugby » Chequebook and a pickaxe: How Sharks recruited in Fitzgibbon’s image

If footy teams are a reflection of their coach, then Cronulla went to market last year with a chequebook and a pickaxe.

But the DNA tests are otherwise growing more conclusive by the day. This side is resembling the one-time Sharks ball boy of the late 1980s more and more.

Fitzgibbon’s status as the club’s best signing in years is not up for debate around Sharks HQ.

The moves made for players from a similar mould have only fast-tracked the club’s remarkable rise from the solid foundations laid by former coach John Morris – who is in the opposition coach’s box this Saturday as Rabbitohs assistant – and a pathways program that’s developed over several years.

In Fitzgibbon, Finucane, McInnes and Hynes, you won’t find a quartet held in higher regard. Or with greater disregard for human nature’s most basic instincts.

“Have you seen the way Dale and Cam play?” prop Braden Hamlin-Uele laughs.

“They just do not give a crap about their bodies. They play for the team. Their whole mentality is team first, and then me. Cam’s got no teeth left, I mean honestly…”

Rudolf described Fitzgibbon’s priorities as a “no dickheads policy” on radio last year. But it’s a term Cronulla types are loath to give airtime given what it implies, unfairly they say, about those that left the club last year. 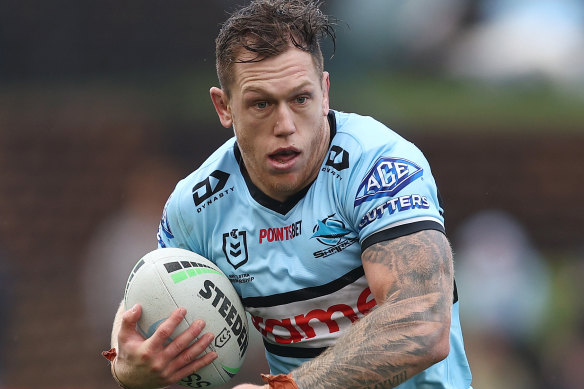 Body on the line: Cameron McInnes has rarely been accused of self-preservation.Credit:Getty

The descriptor of a Sydney Swans recruitment analysis almost 20 years ago now has often been misinterpreted anyway.

The Swans’ secret was not entirely blacklisting anyone prone to dickhead behaviour – because again, human nature, even among the best of us – but bringing it into line with a strong, player-driven culture.

McInnes was signed by Fitzgibbon’s predecessor Morris, a key figure in the rise of so many of Cronulla’s current crop, and saw elements of it the moment he walked through the door.

“It’s a very talented group with no ego in it,” he says. “That’s not comparing it to any other club I’ve been at. But there are big personalities here who prioritise the team first.

“That’s what creates success, people sacrificing things for the team. That wasn’t a shock to find when I got here, more it’s really pleasing to discover.”

Big personalities – like Rudolf, winger Ronaldo Mulitalo and veteran prop Andrew Fifita – are thriving like rarely before under Fitzgibbon.

While Hynes is steering the side and his own credentials for Dally M and Kangaroos World Cup honours from the scrumbase, the addition of Finucane and McInnes reinforced Graham’s influence over a talented, developing pack. 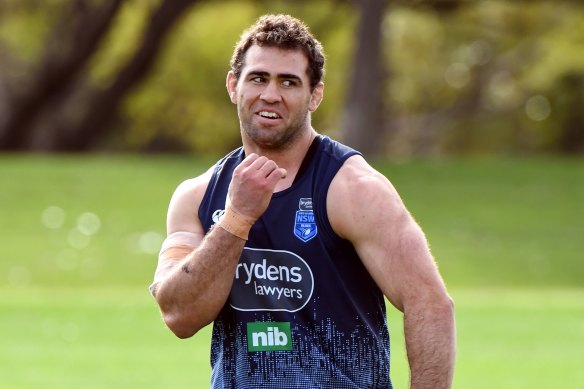 It’s why Finucane signed in the first place, thanks to a three-pronged recruitment strategy including coach, halfback and close mate/Rabbitohs rival Damien Cook.

“I went and sat down with Craig in his room during one of the Origin camps last year,” Finucane says after salary cap pressure played a key role in his move from Melbourne.

“We spoke about his vision for the club, what he saw happening, the culture he wanted to create and how he wanted the team to play.

“It all really appealed to me. At the same time I was speaking to Nicho too because he had already signed while I was still in talks with the Sharks. He was always on the phone to me, asking ‘where’s it at?’ ‘what do you think?’

“He was in my ear all the time and so was Damien Cook. He was in camp and being such good mates with him, Cookie was buttering up Fitzy at the same time because he wanted me back in the Shire.

“There was a few blokes trying to make it happen and I’m so happy it has panned out the way it has because I’ve really enjoyed this year.”

The roll-over of big-money deals last year for the likes of Shaun Johnson, Josh Dugan, Aaron Woods, Matt Moylan and Fifita meant Fitzgibbon and football manager Darren Mooney had more than $3 million in salary cap space to work with.

Tellingly, the bank wasn’t broken on recruiting their main men. The likes of Rudolf, Will Kennedy, Connor Tracey, Braydon Trindall and Teig Wilton, among others, were re-signed as one of Cronulla’s deepest top 30 squads in years was constructed. 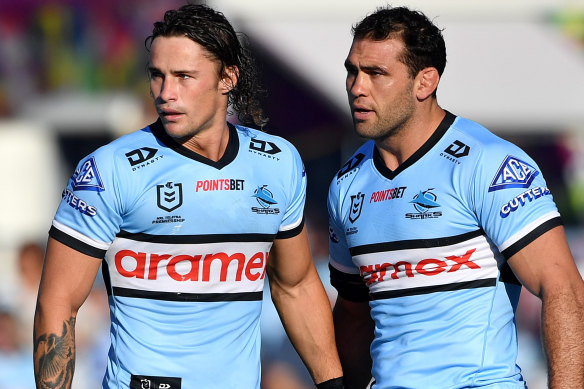 But Hynes and Finucane were pursued with vigour nonetheless. Each time one of the five rivals talking to Hynes upped their offer, the Sharks went beyond it.

Several phone conversations had Fitzgibbon confident Hynes – described by his coach as “instrumental” in last week’s last-gasp loss to the Cowboys – was cut from a similar cloth. The pair’s 90-minute drive from the Shire to Hynes’ family home on the Central Coast confirmed it.

A fourth season was offered with little hesitation to 31-year-old Finucane when other clubs baulked at going beyond their three-year deals.

His contract is uniquely front-loaded and will see him earn a little more than $300,000 in 2025, with most of his estimated $2.5 million deal paid over the next three years.

Finucane’s thinking throughout negotiations was thoroughly Fitzgibbon-esque too, when COVID-19 travel restrictions limited face-to-face meetings and ruled out club tours.

“Seeing facilities and that sort of thing, it wasn’t really a part of my thinking,” he says.

“A weights room is a weights room, whether it’s modern or old. A field’s a field. I was never going to sign somewhere based on facilities or a centre of excellence.

“It was always going to be about my role in the team, the culture and the club, and that’s what I saw in the Sharks.

“Fitzy and everyone else involved has only gone about making that environment better since.”

In like Finn: Did Scottish maverick pave the way for Cooper’s Wallabies return?