As the NSW Origin crew are finding, many rugby league fans express their disappointment by turning on their own. Brad Fittler, Nathan Cleary … and don’t let’s get started about Stephen Crichton and Daniel Tupou.

A ritual of defeat, a case for the psychiatrist’s couch – dismay can be measured by how savagely it turns inwards.

You expect better from Queensland, who seem imperviously loyal. But in the lead-up to Wednesday’s decider, knives from Cooktown to Coolangatta were being sharpened for Daly Cherry-Evans. This result, they were told, was all on him. Somehow the absence of Cameron Munster meant Cherry-Evans as responsible for the next Queensland miracle…or else. Scapegoat curry was on the menu.

Even when Cherry-Evans’s tactical acumen, penetrative kicking and composed leadership did so much to bring off said miracle – for the second time in three years – he was given only brief respite from the weird reservoirs of dislike that emanate out of the game.

Given the inexperience and underwhelming credentials of his teammates, Cherry-Evans might have ascended into the Queensland pantheon when he pulled off the most unlikely Origin series win in 2020. Now he had done it twice. Cameron Smith, Mal Meninga and Wally Lewis were surrounded by stars when they led Queensland, whereas Cherry-Evans was surrounded by mere twinkles.

But even in Queensland, success has not brought love. In Origin, for most of his 20s, Cherry-Evans was not fully admitted to the Smith club, which admittedly was well-supplied with halfbacks, but there was also an insinuation that he didn’t deserve a slice of their glory. 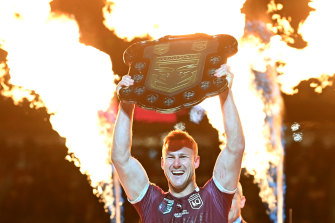 He would have to go out and earn his own. And now he has, twice. On Wednesday night he schooled a NSW opposite number who enjoys the highest reputation since Andrew Johns. Yet acknowledgement is always just a bit lemon-scented, a bit temporary, a bit riddled with caveats. And that’s just north of the border.

Why is it so? An explanation doesn’t need Julius Sumner-Miller, or anyone else with a hyphenated name. It’s pretty simple. Cherry-Evans plays for Manly, and in the mists of time he backflipped on a move to the Gold Coast so he could play for Manly forever.

The league community suddenly became, for its one and only time, Titans fans. DCE has never been allowed to forget how much rugby league cares for … um …the Titans.

Nor does he fit the official licensed template of rugby league good blokedom. In NSW, this template is known as Nathan Hindmarsh. In Queensland, the King. Or JT. Or Fatty (deducting points for a career at the Sea Eagles).

There are so many good blokes of a certain mould in rugby league, it takes a hint of eccentricity – the Fittler candour, the spinning eyes of Billy Moore – for one good bloke to stand out against a field populated exclusively by other good blokes.

Cherry-Evans has never met the required standard. He’s Manly but not manly. He’s almost too good to be a bloke. He minds his Ps and Qs and gives off the air of someone who colour-codes his shirts and lines up his loafers in his closet. And owns loafers. Neither his face nor his speech patterns show enough traces of having been brutalised by all those forwards charging at him year after year, which suggests that he hasn’t been tackling them.

Look again. All successful halfbacks must be tough defenders, being targets for the opposition game plan. Cherry-Evans is one of the toughest and most effective defenders. Instead, because one of his jobs is to lobby referees for his team, he is anathematised as un-tough, a whiner, associated with a tone of complaint that, if it is not careful, this column is in danger of slipping into.

When the late Bob Fulton talked Cherry-Evans back down the Pacific Highway from Robina to Brookvale, he was questioned for pledging so much money, over so many years, to the wrong player. Common wisdom had it that Kieran Foran, a certifiably good bloke, was the one to bet the house on. Instead, the Cherry-Evans deal was one of Fulton’s last great legacies to his club.

But even this week, after years of repeated excellence, praise for the DCE masterclass was tempered by an insinuation of the Dane Gagais – the proposition that Cherry-Evans turns on this form for state but not club. This can only have been generated by those who don’t watch Manly. Week after week for a decade, a team with a fluctuating roster and little depth has been kept in the chase thanks to DCE’s IQ. Manly fans know this.

He is physically sound and remarkably consistent, putting in no more than two or three bad games a season among more than 20 good ones. It’s said that a No.7 is only as good as his forwards, and at Manly he has benefited from one of the better packs. But a halfback is also made to look good by the men on his outside, who read his kicks, catch his passes, put the icing on the pudding he has cooked up.

At Manly, since the retirement of Jamie Lyon, Steve Matai and Brett Stewart, he has not had particularly strong outside backs. When Tom Trbojevic has been on the field, Cherry-Evans’s genius is on display. All the other
weeks, which is quite a lot, he has to make a silk purse out of Jason Saab’s ear.

Manly’s dependence on Cherry-Evans to manage the game and make the play has stripped them of one of his great strengths. Alone among the fine halfbacks of this era, Cherry-Evans is at his very best when running onto the ball out wide like a three-quarter. Thurston, Cronk, Cleary – none had that blistering wide-running game.

Occasionally, when Manly have had multiple points of attack, he has had the liberty to do this, but mostly he’s making the best of what he’s been given. A reliable club professional who also happens to be the best halfback of his time: what, dear rugby league, is not to love? 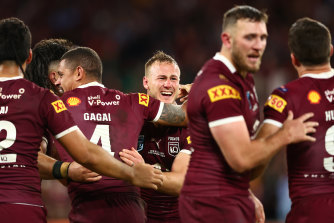 Later this year, the Australian selectors will pick the first Kangaroos squad since the COVID-19 pandemic started. Cherry-Evans and Cleary will both be in it, if fit.

Between now and then, Cleary will dazzle with the premiership favourites. Cherry-Evans will be up and down with a team likely to finish somewhere between fifth and 10th. Cleary may win another grand final.

But one Queenslander who has a long memory and keen loyalty is the national coach Mal Meninga, who
only need remember the winter Origin matches in Sydney and Brisbane, when Cherry-Evans
proved who was No.1 at No.7.