Home » Rugby » Concussion conundrum: The not so good shepherd makes for a headache

For the second week in a row, an AFL player was concussed as a result of a bump, but this time there was not nearly the same outrage about Bulldog Zaine Cordy’s action against GWS’s Tanner Bruhn as there was about the way Patrick Cripps crashed into Callum Ah Chee the previous week.

Cordy was trying to shepherd Bruhn away from Ed Richards when they collided. All were moving at high speed when Cordy and Bruhn met head-on, shoulder to shoulder. 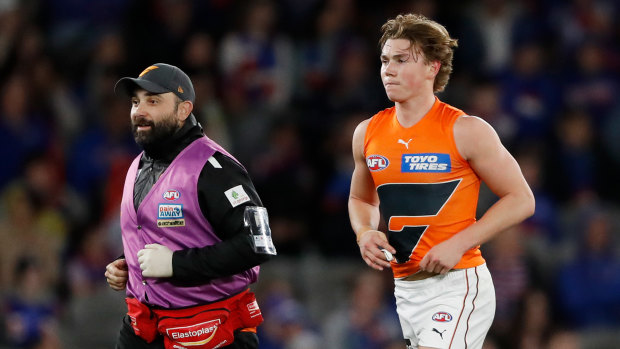 Tanner Bruhn leaves the field with a member of the GWS medical staff.Credit:Getty Images

There was no remonstration, no free kick was paid and the match review officer did not grade the incident, but instead sent it directly to the tribunal, which fairly swiftly cleared Cordy. It was nothing to see here, play on.

No rules were broken, no norms were offended and there was no backlash against Cordy. But he still ended up at the tribunal.

Why? It can only be because the head is supposedly sacrosanct — it’s a mantra now — and any head injury makes everyone jittery. In that light, MRO Michael Christian wasn’t making a referral, but a plea. What do we do here?

What to do indeed? Neither player did anything wrong. It was an accident. In a collision sport, accidents will happen. Not might, will. But is the game doing all within its powers to minimise the chance of accidents?

The ball carrier must expect contact. This we all accept. But must an incidental like Bruhn expect contact? He plainly did not see Cordy until the last split second. He tried to sidestep, but Cordy went with him. The contact was shoulder to shoulder, but because of the speed involved, Bruhn flipped and his head hit the ground first, and so it was good night for him.

We thrill to the contact. We marvel at the courage. We fear for a diminished spectacle if any more curbs are introduced. At the same time, we’re aghast at head injuries and are discomfited by tales of long-term repercussions. We demand that more is done although not too much more. But what?

AFL is unusual in that it allows contact with a player other than the ball carrier. The rugby codes don’t. It’s called obstruction. Soccer certainly doesn’t. Gaelic football doesn’t. Even ice hockey doesn’t. 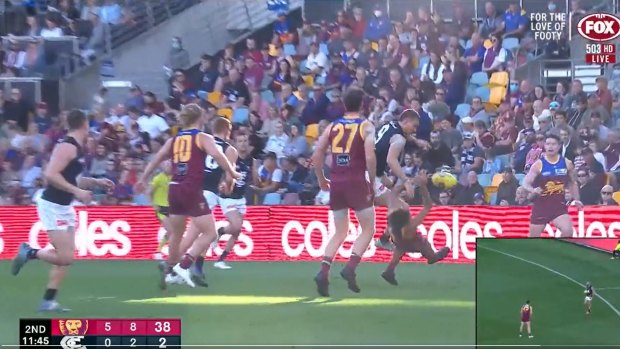 Gridiron does, but the game is wholly predicated on preventing tacklers from getting to the ball carrier, to the extent that some players’ only job is to play the man. It is different.

AFL doesn’t allow third-party interference in ruck contests or marking duels. It’s not allowed beyond five metres at ground level. But within five metres, the gloves come off. Mostly it’s harmless: a block, a nudge. It’s also part of the game, which would be unimaginable without it. But it was unimaginable without king hits and shirtfronts once, too.

Making a player responsible for the outcome of a bump when contesting the ball, no matter how unintended, has pretty much dealt with shirtfronts. 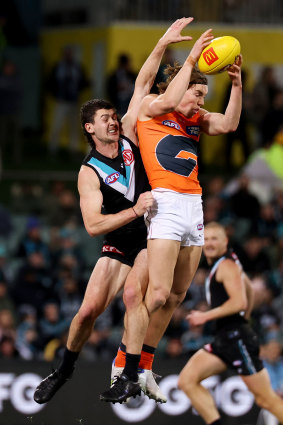 But shepherding remains a grey area. Tackling a chasing player is plainly out, which leaves only bumping and blocking — or does it? Shepherding rarely leads to serious injury. But try telling Bruhn this week how much better off he is than Ah Chee.

The bottom line is that after a decade or so of debate, we still haven’t defined what is the minimum level of care one footballer owes another, and what is the maximum acceptable injury toll.

Or maybe we have drawn the line. It’s between Ah Chee and Bruhn. At that, it’s still an awfully fuzzy one.