But the Queensland Origin coach would have felt even worse when watching the Nathan Cleary masterclass on a wet but entertaining night in Sydney’s west. 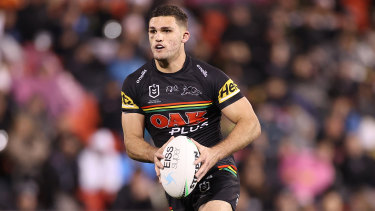 Nathan Cleary was outstanding for Penrith during their big win over the Sydney Roosters.Credit:Getty Images

“I heard the news this morning Jake won’t be available, he got the injury at training,” Fittler, when asked if Crichton was a likely addition, said.

“One of the hard conversations was speaking to Jake Trbojevic after getting an injury. It was a hip pointer problem. He will be available for the next game so he won’t be out for too long.

“There are a few playing this weekend, but Angus did a terrific job for us last year, and he’s also played a lot of middle, too, so that versatility helps.”

Crichton and Martin will not disappoint at Suncorp Stadium next Sunday, but there jobs will be made easier by the brand of football Cleary is producing. 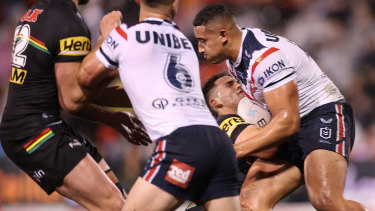 As Phil Gould said on the commentary about Cleary: “He’s conducting the orchestra – he looks so confident in his own skin.”

The only thing not pretty about Cleary was the cut he suffered during Origin I that was still clearly visible on his cheek, which has since caused his right eye to become bloodshot.

The Roosters lost Sam Walker (shoulder) but raced out to a 12-0 lead in the wet. Their fans and coach Trent Robinson will be unhappy with the decision to give Taukeiaho 10 minutes in the bin for clipping Cleary.

Cleary was slipping on the wet grass and while Taukeiaho got him high, he had only a split second to adjust his tackle.

Penrith scored 14 points while Taukeiaho was cooling his heels. Referee Ashley Klein suggested there were no “mitigating circumstances”, despite Cleary appearing to lose his balance before the contact.

Gould even suggested the decent idea of a player in the bin returning early if an opposition team scores a try.

After Fletcher Baker and Adam Keighran crossed early, Joey Manu knocked on from a Penrith kick-off, and the home side went on a ruthless attacking run, including a Cleary kick early in the set for Stephen Crichton to score.

Brian To’o bagged a double, Cleary watched one of his own kicks bounce before grabbing it and shaking off James Tedesco to score a four-pointer early in the second half, while Charlie Staines grabbed his 17th try in as many games, and was unlucky not to have a double.

Isaah Yeo was a workhorse and given a standing ovation by the Penrith faithful when given an early mark.

NRL: Round 11 team of the week