Round two of the AFLW season featured impactful umpiring decisions, big margins and the competition’s lowest score in history. Here’s what we learnt.

A controversial umpiring decision that could have been the difference

In Essendon’s one-point loss to Carlton on Sunday at North Port Oval, league best and fairest Maddy Prespakis was on the receiving end of an eye-catching umpiring decision at the quarter-time siren when she was adjudged to have played on while lining up a set shot. Against her former side, Prespakis had taken only a few steps when the siren sounded for the first break and immediately stopped to go back and take her shot. But the umpire denied her the chance, judging instead that she had played on off her line. It could have made the difference too, with her side going down by the barest of margins as the final siren sounded. Carlton had the upper hand for three quarters and dominated territory and possession, but the Bombers had a huge last quarter surge to get within touching distance off the boots of Daria Bannister, Steph Cain and Prespakis, all in quick succession. The Blues’ win was much to the credit of Darcy Vescio, who booted three goals, and ruck Breann Moody who finished with 30 hitouts and drove the ball forward throughout the game.

There’s been increasing discussion in the AFLW around venues and facilities, including a push from players last week to have more games at larger stadiums after the Essendon and Hawthorn blockbuster clash at Marvel Stadium. Following this, Olympic gold medallist, GWS’ Chloe Dalton slammed the conditions at Ikon Park for her side’s match against the Western Bulldogs – saying the players had to cross the grounds post-game in their sports bras and towels to take a shower. Another development in the conversation came when this weekend’s Port Adelaide and Western Bulldogs match was halted for 31 minutes as Britney Gutknecht was taken to hospital in an ambulance. In a horrific bit of play, the Dogs player’s lower right leg snapped after Power’s Abbey Dowrick attempted a smother, and she fell to the ground in agony. The second quarter ran for close to 50 minutes with the added time, including 10 minutes for a second ambulance to arrive. As AFLW matches require one ambulance at the ground at all times, after the first vehicle took Gutknecht away, play couldn’t resume until its replacement arrived. This raised questions on the amount of ambulances that should be at grounds at all times, especially with the amount of injuries in the AFLW, and their accessibility into venues. 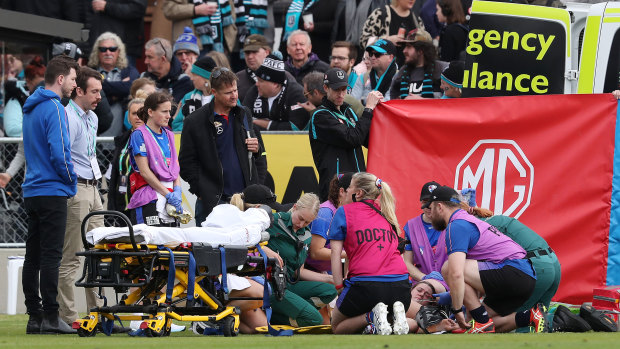 Heave-ho Freo sent down below

Geelong held Fremantle to just one point – the lowest score in competition history – in a 26-point win at Fremantle Community Bank Oval on Saturday. Fremantle finished fifth last season, missing out on a top-four spot to North Melbourne on percentage and bowing out to the Kangaroos in the first elimination final. The side has resided in the upper echelons of the ladder in recent seasons and it looked like 2020 may have been their year before the season was cut short due to COVID-19. Their window to claim their club’s first flag may have closed, as evidenced by not being able to boot a single goal this week and losing to Brisbane last weekend by 49 points. The Dockers have been hit hard by injury (with goal-scorers and on-field leaders in Kara and Ebony Antonio both sidelined), and expansion, losing key forward Gemma Houghton to Port Adelaide. They can still turn it around off the back of Kiara Bowers, Hayley Miller and Aine Tighe, but they’ll need their younger players to step up. Starting 0-2 is well outside the usual swing of things for the Western Australian team, and they’ll to lift if they want to be competitive this season. 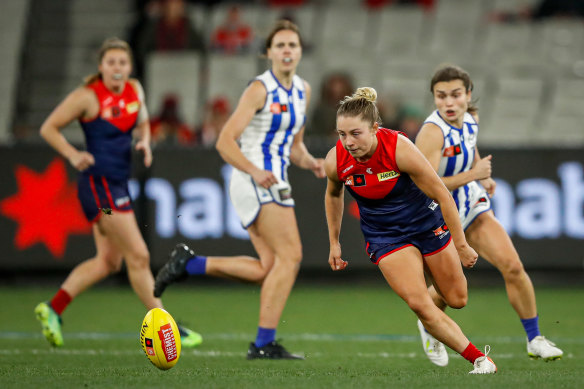 Melbourne’s Tyla Hanks closes in on the ball.Credit:AFL Photos

Melbourne are 2-0 and their wins have come against last season’s reigning premiers and top-four finishers North Melbourne. On Friday evening, the Demons lit up the MCG before the men’s qualifying final between Melbourne and Sydney, holding back a scare from the Kangaroos and claiming a two-point win. In the forward line, they had both experience on show (captain Daisy Pearce booted two majors) and youth, with speedy forward Alyssa Bannan calm and collected under pressure, kicking the match winner. Down back, Libby Birch was a brick wall, denying the Kangaroos’ avenues to goal. Starting off with arguably the toughest draw and yet securing two convincing wins, the question now becomes: Just who can beat the Dees?
Their next game is a winnable one against St Kilda, but the week after may provide the answer. Playing at home at Casey Fields, Melbourne will host Brisbane, a team that beat Greater Western Sydney on Sunday by 47 points and Fremantle by 49 points the week prior. The Lions, last season’s third-place finishers, have been handed an easier opening two matches but have showcased classy, measured football and won by significant margins, boosting their percentage and elevating them to the top of the ladder.

It was injury carnage in St Kilda’s win over Hawthorn at Box Hill City Oval on Sunday afternoon with a succession of knee injuries sidelining crucial players – all before half-time. In the first 10 seconds of the game, Hawthorn’s ruck Tamara Luke went down in the middle of the ground with a right knee injury. Lucy Wales then replaced Luke in the ruck. In the same quarter, important Hawks midfielder Louise Stephenson fell awkwardly, her left leg stuck under her body as she went down. She was helped off the ground by trainers, was unable to put any weight on her leg, and was soon in a moon boot and on crutches. But the devastation wasn’t over yet. A terrific smother by young Hawk Zoe Barbakos, who is emerging as one of Hawthorn’s best players alongside Jasmine Fleming, came at the cost of Jayde Van Dyk, who was left on the ground clutching her knee. Fans now will anxiously await news on the injury front, left with a sickening image on the TV with all three players on crutches in a huddle post game. On a brighter note, St Kilda can walk away satisfied with a comprehensive win over the expansion team, while Hawthorn are showing a lot of promise in what they’re building.