The clash between North Melbourne and Melbourne in Hobart on Sunday is in the balance, and could yet have the surging Demons chase a seventh-straight win before their home supporters.

The Kangaroos are due to stage their home-away-from-home match at Blundstone Arena but that remains in doubt as the Tasmanian government awaits public health advice. 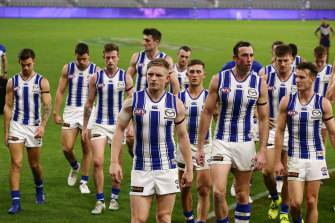 Kangaroos players leave the field after their loss against Fremantle at a closed Optus Stadium on the weekend. Credit:Getty Images

The winless Roos have been forced into 14 days of home isolation under Victorian government protocols but were relieved on Monday when their COVID-19 tests were negative after their return from a locked-down Perth on Sunday.

Players, coaches and staff have been given exemptions to train and play within that two-week period but whether Sunday’s clash goes ahead will be dependent on whether they are given travel clearance from the Tasmanian government.

“We will rely on public health advice and ultimately the advice of the deputy state controller,” Tasmanian Premier Peter Gutwein said on Monday.

The Kangaroos were in Perth during a 72-hour hard lockdown in the city and the Peel region and on Monday it emerged while the lockdown would end, there would be interim restrictions from Tuesday until Saturday, when crowds were still banned from stadiums.

“Obviously, that will inform our public health director here in Tasmania. Noting there’s a lot of planning that goes in to an AFL game, I’d expect we would know somewhere in the next 48 hours or so,” Gutwein said.

The AFL said it was still planning for the match to go ahead in Tasmania but it had the ability to switch venues as late as the weekend. Marvel Stadium is free on Sunday and the 1.10pm clash could go ahead there if required.

The Kangaroos, who are facing financial implications should the match be transferred, said on Monday they were involved in delicate discussions. North Melbourne’s deal with the Tasmanian government, which is backing a stand-alone club of its own, ends after this season.

The Roos lost to Fremantle in a closed Optus Stadium on Saturday night, after the West Australian government had confirmed the lockdown. This was implemented after a man contracted the virus while in one of the city’s quarantine hotels. There were no new cases announced on Monday.