Home » Rugby » Craig Kelly, the kingmaker behind the scenes of the Pies drama

Craig Kelly’s kingmaking role in the unfolding fiasco at Collingwood remains one of the more intriguing elements of the multi-layered saga.

Like Peter Moore, who has also backed Jeff Browne’s audacious challenge for the club presidency, Kelly has a son playing at the football club which now presents as an out-of-control family feud. Browne has been forced to build a seven-strong ticket but surely having sons on the Magpies’ list renders both Moore and Kelly untenable as directors. 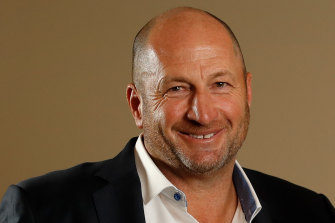 In fact Kelly does so much business with the AFL that when he endorsed Browne it may as well have come carrying the league logo. If Kelly and Browne are not aligned on Buckley then Kelly is a handy strategic advisor to the Browne ticket in terms of how McLachlan would prefer the board takeover to run.

Certainly the AFL boss would not have wanted it to come to this. After a series of appalling misfires – the presidential procrastination after McGuire’s messy departure, the Bridie O’Donnell appointment, the self-serving Korda letter to Pies’ faithful in the Herald Sun – Korda’s board fired its best shot when it vowed to stick together on Wednesday.

This after Browne finally announced his challenge first-hand to the media. If Browne, who had moved to join unsuccessfully to forces with Peter Murphy through a conversation with Paul Licuria earlier in the week, had hoped to divide and conquer more peacefully, his public strategy put paid to that.

Jodie Sizer might be the board’s best public asset but her public performances have failed to support that, which reflects just how poorly the club has presented itself since the end of last season. The Magpies media management team has either been ignored or performed dismally. From the Ned Guy public approach to the salary cap crisis, to Eddie McGuire’s “proud day” to Buckley’s comments about Adam Treloar to the Korda letter to Buckley’s spin on last week’s loss to Geelong. No wonder the members are restless.

Now Browne is in too deep to back down and working vigorously to put together a ticket which, to appease members, would surely require at least one astute former player and preferably from the team of 2010. Browne has also been in talks with Paul Tuddenham, the past players’ head at Collingwood who led one of the moves against McGuire and who is also closely aligned with Kelly.

This columnist has raised Chris Scott as a potential alternative to Buckley along with Alastair Clarkson and Ross Lyon. Scott is one of a list of coaches commercially handled by Kelly’s TLA along with Adam Simpson and Leon Cameron. Should the Magpies make a play for the highly regarded Geelong coach it would not be the first time Kelly has found himself embroiled in a managerial thicket.

Back in 2011 Kelly’s close friend – and client – Garry Lyon was trying to find a coach for Melbourne and raised the prospect of Ross Lyon – then managed by Kelly. Kelly told him Lyon was in the process of re-signing with St Kilda and definitely unavailable. Ross Lyon was never told of Melbourne’s interest. Disenchanted with St Kilda’s management and concerned at Kelly’s tentacles across the market, he negotiated with Fremantle, whose then coach Mark Harvey was another Kelly client, without Kelly’s knowledge.

It was not the first or last time a Kelly client has felt submerged by the likeable entrepreneur’s strong weight of AFL clients and connections. Just ask a number of former players who work in the media. Some would say it’s better to be in Kelly’s stable in order to remain in the forefront of big employers like the Seven network and others have felt they missed opportunities because Kelly put another client forward ahead of them. Certainly if Buckley is let go by Collingwood he will most likely finish up at Seven next year.

This is not to suggest Kelly’s is a Machiavellian figure in football or at Collingwood. He is neither unscrupulous nor mean spirited and is in fact one of the game’s more popular characters who does at times take on the AFL. As he did – ultimately unsuccessfully – over the game’s attempts to force the poorer clubs to limit payouts to sacked coaches.

There was a time Kelly, too, coveted the Collingwood presidency and loomed as the obvious successor to McGuire. He contemplated before the Mick Malthouse-Buckley handover was put in place how he could manoeuvre such a power play in the face of his obvious business conflicts but then the Magpies won the flag and Buckley took over and Kelly abandoned his push. He did fall out briefly with his close friend and former Magpies CEO Gary Pert when son Jake was not taken as a father-son.

In any case Kelly does his best work behind the scenes. He too is probably horrified at the bloody mess this football civil war has become but should Browne emerge victorious, as still looks more likely although no longer as certain, then the challenger has a powerful ally pulling whatever strings he can muster.

More certain is that as the casualties pile up, Kelly will not be among them.

George Ford ruled OUT of England's clash with Barbarians

Magpies turn to young and old on Anzac Day

CHRIS FOY: Rugby shutdown will leave the game on a knife-edge