Crichton and Kaufusi were involved in a push and shove at Suncorp Stadium before the bad blood between the pair spilled over into last Thursday’s Sydney Roosters-Melbourne Storm clash. 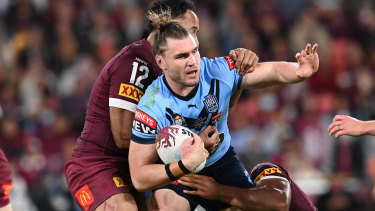 Not only did they fire up at each other right on half-time, but Kaufusi tried to make a beeline for Crichton when a melee broke out between the teams, only for Jared Waerea-Hargreaves to collar Kaufusi.

The war of words continued in back play between the back-rowers, and Crichton was in no mood to play nice when speaking with the Herald.

The only other notable duel this Origin campaign has involved South Sydney pair Latrell Mitchell and Dane Gagai, whose rivalry has not been discussed back at Redfern.

As for Crichton shifting his sights to Kaufusi after regularly clashing with Maroons enforcer Josh Papalii – Papalii pulled Crichton’s hair in Origin II last year – he said: “It’s not Christmas yet. But we probably won’t be exchanging Christmas cards any time anyway.

“There was a bit of fire there. I can’t wait to play him again on Wednesday.

“I don’t know how it started. It started on the field [at Suncorp], it carried on to last Thursday, and it will probably carry on into next Wednesday.

“There might have been a couple [of incidents] that fired him up. You’ll have to ask him.

“I won’t air any dirty laundry. I’m looking forward to Origin III, that’s for sure.

“He’s a quality player. I wish him all the best. I look forward to playing him.”

Crichton said a few of the Storm’s Queensland contingent were in a mood last week after the heavy Origin loss, but Kaufusi was the main player out there with a point to prove.

“And no matter what side you’re on, it inspires both teams watching those guys go at it,” Cook said.

NSW coach Brad Fittler said: “If players are disgruntled with other players from different clubs, it’s their perogative. I thought Gus [Crichton] was great the other night.”

Crichton started on Kaufusi’s edge before shifting to the middle during Origin II. Aside from keeping an eye on Kaufusi, Crichton was happy to try and protect halfback newcomer Mitchell Moses.

“I know Mitch is strong enough to stand on his own two feet, but we’ll have his back,” Crichton said.

Mitchell and Gagai have aimed up for their respective states, but not a word about their run-ins, including a few stray elbows and face rubs, have not been mentioned at Souths. Maroons forward Jai Arrow brought up the subject after game one, but the topic was quickly changed.

“One of the best things we do at Souths is the moment we walk back in there is embrace each other and not talk about the games,” Cook said.

“I don’t talk to ‘Gags’ during the whole week [leading up to games]. Gags actually taught me that. I remember congratulating him when he made the Queensland side in 2018, but he never wrote back, then he later told me why. I liked that, and since then that’s what we’ve done.”

“I’ll play my role for the team again and wherever coach needs me. If anybody goes down I’m keen to jump in wherever, otherwise I’m happy to play my role through the middle.”

Meanwhile, Wallabies legend Tim Horan has reached out to Crichton’s family in the past week since telling the Herald it was “now or never” for Rugby Australia if they were serious about luring the 25-year-old back to their game. Crichton has made it clear he is keen to extend his stay at Bondi beyond the end of 2022.