The scoreboard and history books will show one of the competition's foremost premiership favourites notching their fourth successive win by routinely taking care of business by 28 points against a winless, bottom-of-the-ladder opponent.

That only tells a fraction of the story. 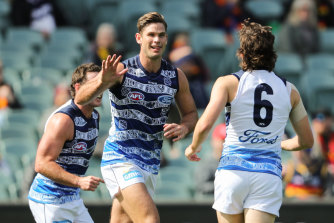 Tom Hawkins and the Cats notched another win.Credit:Getty Images

Geelong's title charge remains very much on track and Adelaide's losing drought extended to a 16th successive match but the Crows' thirst for the contest – on the back of a horrific performance against the Western Bulldogs – meant the season's biggest upset was on the cards until late.

Through the bullocking work of bruising ruckman Reilly O'Brien, Rory Laird and the rejuvenated Matt Crouch, who chalked up a career-best 14 tackles, Adelaide outmatched the Cats at the contest.

The Crows' pressure was hot early and rarely relented, Geelong made to work hard for their four points.

After a bumpy start, the Cats threatened several times to take the match away from Adelaide, with Cam Guthrie and Sam Menegola continuing their career-best run of form, Jack Steven running hard both ways and Mark Blicavs providing mismatches all over the ground. 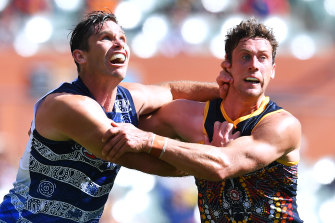 Even with captain Joel Selwood sidelined, Geelong still looked to have too much class and cattle.
It took a long time for the Crows' wall to burst, but it finally did, late in the fourth quarter.

Adelaide kept Geelong at arm's length, trailing by 11 points at quarter-time and seven at half-time, before drawing level early in the third thanks chiefly to some wizardry from Shane McAdam, who goaled after bursting through a one-on-three against Jack Henry, Mark O'Connor and Lachie Henderson.

David Mackay's goal after the three-quarter-time siren pegged the Cats' advantage back to nine points – but it was Adelaide's last hurrah.

Coleman Medal leader Tom Hawkins finally unshackled himself from Kyle Hartigan's iron grip with an improved second half, Dangerfield twice set up Mitch Duncan for late goals as the margin swelled beyond what reflected a truly befitting scoreline.

Geelong weathered Adelaide's initial storm but should have led by more than 11 points at quarter-time, but for Patrick Dangerfield's indecision and Luke Brown's desperation on the last line.

On target for his lowest goal-kicking return since his rookie 2008 campaign with Adelaide, Dangerfield entered the clash against his old side with a 6.12 return on the season, with nine misses from his previous 11 shots at goal.

One of football's most confident players, Dangerfield appears to have lost his verve in front of the sticks.

Dangerfield got the 1-2 back from Hawkins but was tackled by Brown in the goalsquare, three seconds out from the quarter-time siren, fluffing a golden opportunity to push the Cats further clear.

With his unfair combination of size, mobility and endurance, Blicavs proved a nightmare match-up for the Crows all over the park.

The 198cm Blicavs spent time at centre-half-back in the absence of Harry Taylor (managed), took the occasional ruck tap, lined up on a wing and was dangerous when he drifted into attack.

Blicav's go-ahead goal midway through the first term came courtesy of a free kick against the desperately outmatched Lachlan Murphy.

Blicavs then moved into the middle and onto Sloane where his tackle forced a holding the ball decision against the Crows skipper and set up a major to Rhys Stanley.

In the fourth quarter, Blicavs then tagged the dangerous Laird, quelling the Crows danger man's influence.

The big, big sound makes an echo as Giants shrug off Geelong