The Canberra Raiders are investigating an alleged incident involving centre Curtis Scott at a nightclub over the weekend. 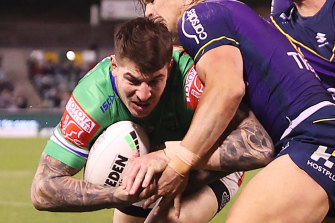 Curtis Scott’s future at the Raiders could be in jeopardy following his alleged involvement in an incident at a Canberra nightclub.Credit:Getty

It couldn’t have come at a worse time for the Raiders, given their woes on the field to start the year. The news could also place Scott’s career at the Raiders in jeopardy.

He was arrested on Australia Day last year and charged with resisting arrest, however police footage later saw charges dropped.

Not Gawn for long: Demons skipper set to return for Bulldogs clash