Home » Dale Hopgood died after a game of footy. On Sunday, his son makes his NRL debut

On the day J’maine Hopgood’s rugby league career began as a seven-year-old in Hervey Bay, the man who inspired his journey lost his life.

Dale Hopgood, the father of the 22-year-old Penrith Panthers forward set to make his debut against the Titans in Brisbane on Sunday, was found dead in his car in 2007 after a game of rugby league he was never meant to play. 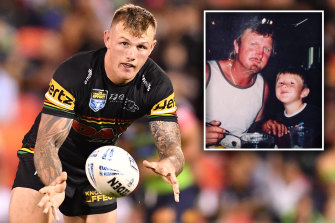 J’maine Hopgood will make his NRL debut for Penrith on Sunday. Inset: A young J’maine with his late father, Dale, who died of a heart attack after a game of rugby league in 2007.Credit:NRL Photos, Supplied

On the morning of March 24, 2007, the 39-year-old father of four left the house for Bundaberg to take his oldest child to a game. It was the last time his wife Anita, who had taken the couple’s other three children swimming, saw her husband.

“They were getting in the car and I caught Dale with his little footy bag,” Anita told the Herald on Thursday.

“When he left, he actually missed kissing one of our kids. He came back up and found her and gave her a kiss and went again. He drove out the driveway and that was the last time we ever saw him.” 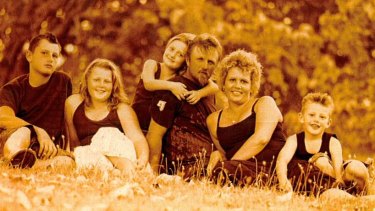 The last family Hopgood photo that was taken before the sudden death of Dale. (J’maine pictured far right).

Dale scored a try that day. Missed a goal, though, as he reliably informed his wife on the phone straight after the game. He complained of severe indigestion and a sore back.

“Usually, he’s the first bloke into the pig pen, they call it, and having a few beers with the boys while they watch A-Grade,” J’maine told the Panthers.

“On this day, he didn’t feel up to it. He said he was going to go and lie down in the car. Halfway through the game, a couple of my uncles said, ‘Hoppy’s not with us’. They found him not breathing in the back of the car. He had a massive heart attack. It’s a hard day to recall. I’ll never forget that.”

Just that, morning J’maine had walked on to a rugby league field for the first time, in an under-7’s competition in Queensland. 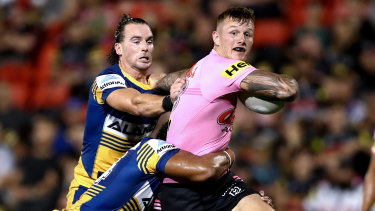 J’maine Hopgood during a trial match between the Panthers and the Eels at the start of the year.Credit:Getty

“He came off the field and we were standing there and he said, ‘I’m not playing that again, that was too rough dad’,” his mother recalled of the day.

More than 14 years on from the day J’maine reduced the room to tears when he bravely read out the family’s three-page eulogy at his father’s funeral, he will honour the man whose initials he has inked across his chest when he runs out on to Suncorp Stadium in front of more than 50 family and friends.

Hopgood found out he would be making his debut on Monday, the day of his 22nd birthday. The cheer from within the team room could be heard across the Penrith academy.

The emotions on Sunday night will be a stark contrast to those felt when the lives of the Hopgood family changed all those years ago. 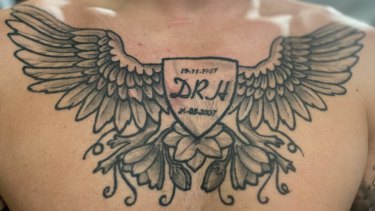 The tattoo honouring his father that J’maine got as a teenager.

“I remember thinking, ‘How am I going to do this with four kids?’” Anita admitted. “We didn’t have any life insurance or mortgage insurance or anything. I was 34 with four kids and not a cent to my name. As much as I could’ve sat in the lounge chair some days and not moved, I had four kids that I made sure I did not stop for. J’maine’s got the same drive.“

The community, who still play for the Dale Hopgood Memorial Shield at Hervey Bay’s last home game each season, rallied behind the family. The town raised more than $100,000 that Anita placed in a trust to help her kids through school and sport. Dale’s friends even built a hair salon in the family home for Anita to work out of.

“I knew I just had to put a roof over their heads and food on the table,” she said. “The community was unbelievable. They helped me do that.

“I always say to the kids, ‘There’s always people worse off than us’. As sad as it was, we had to get on with it. You have dreams and you go out and make them happen.”

On Sunday night, J’maine will do just that. “Dale would be the proudest man I know,” Anita said. “He loved his footy. He lived for his footy. He would have loved nothing more than to see this day.”

Wales’ summer rugby Tests among sporting events set to hold up to 10,000 fans from Monday

‘I’ll do everything to keep Nine happy’: V’landys aims to heal wounds