Geelong superstar Patrick Dangerfield is no longer under “duress” and is ready to return to full speed in Saturday’s clash against Greater Western Sydney in Canberra.

And Western Bulldogs pair Alex Keath and Tim English are a chance to make surprise returns for the club’s vital clash against Port Adelaide on Friday night.

The Cats still have selection issues to address, including the fitness of ruckman Rhys Stanley (ankle) who is in doubt and may be replaced by Esava Ratugolea (ankle), who has not played since round three. Ratugolea could form a ruck pairing with Mark Blicavs. 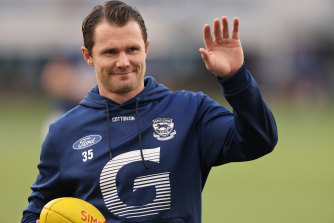 Full speed ahead: Patrick Dangerfield will return for the Cats.Credit:Getty Images

Quinton Narkle (ankle), held back from a VFL return last week, is also being considered for a senior recall, while Cats coach Chris Scott suggested Sam Menegola (knee soreness) was likely to return via the VFL.

The Cats are determined to rebound from a three-point home loss to Fremantle, and Dangerfield is central to this, having missed the past fortnight to rebuild his fitness. The 2016 Brownlow medallist had been unable to train for much of the season because of a corked calf but has regained his explosiveness through a strong block of training.

“Sometimes you get into the mentality that you have just got to get to the game and then build from there but you sort of de-condition yourself because you are unable to train during the week, which is what has happened to me sort of over the last month of footy,” Dangerfield said on SEN.

“Not being able to train during the week, then being only able to get to game day, you are not hitting certain speeds on game day. You can go a month like I did without getting any above 30kmh speed, and that’s really my role in the team, like a few others, is to provide speed on the game.

“If you are not able to hit that, it doesn’t benefit us as much as I need to do to contribute.”

Scott, who has finalised a three-year contract extension, said the Cats were taking a more stringent line with their senior players this season in terms of ensuring they played at full health.

“That’s clear that he [Dangerfield] is an important player to our team but what we have tried to explain a little bit over the last week or two is that we are pursuing a policy, particularly with our more experienced players, is that we get them in a position through their training to come in and perform at their best,” Scott said.

“Pat, over a couple of weeks with quite serious corks, wasn’t able to train, was playing under duress and it made it clearer for us the right decision for him and the team longer term was to get that right and come back when he is ready to play really well, and we think that is this week.”

The Cats will be without speedster Max Holmes, who has had surgery for an ankle syndesmosis injury he suffered against the Dockers. He will be sidelined for what the Cats say will be the “short-to-medium term” but Essendon’s Zach Merrett has shown players can return within four weeks.

“We were really pleased with the way Max was going individually but, in terms of his contribution to the team, it can’t be understated how important he became quickly,” Scott said.

The 2011 premiership coach said there was enough evidence to show the seventh-placed Cats (4-3) could go on a season-defining run, as they did from the corresponding round last year, and vault into the top four.

To do that, they must master their new attacking game plan, which, according to skipper Joel Selwood, remains a work in progress. And they must find a way to curb Giants’ maestro Toby Greene, who has five goals in his two matches since returning.

Greene will have a point to prove against the Cats, for his suspension for making contact with an umpire meant he missed last year’s semi-final loss in Perth. He also has a history with the Cats – he was suspended last year for a high fend off on Dangerfield, for which sent the Cat to hospital.

“He is a really good player … and has made a difference to them. I don’t think it’s just him – I think they have got their game humming,” Scott said.

The spotlight on Giants coach Leon Cameron has eased after a 10-goal win over Adelaide, while an easing injury list has also buoyed the spirits of a side with a 2-5 win-loss record but that still believes finals are a possibility.

Bulldogs key defender Keath was expected to be sidelined for up to six weeks with a hamstring injury but has missed just three games. He and English completed a game-like rehab session on the weekend but are not over the line to return.

With the Dogs do not boast great depth in the big man department, both players are crucial to their club’s hopes of breaking into the eight after their slow start to the season.

Mitch Wallis is also in line to play despite being subbed off with a foot injury in the win over Essendon.

Blues, McKay to talk contract during bye round

Pre-finals bye is back in the spotlight