Joe Daniher has avoided season-ending shoulder surgery but the Brisbane Lions star will be sidelined for at least a month.

Daniher, who has enjoyed a strong start to the season with 19 goals, was hurt in the Lions’ 24-point win over the Swans at the SCG on Sunday. 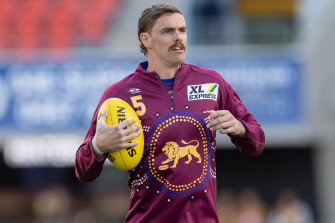 He was subbed out of the game having partially dislocated his shoulder.

There were initially fears he would require a reconstruction, but scans on Tuesday eased those concerns. He is expected to miss between one and two months.

The Lions face West Coast, Adelaide, Hawthorn and Greater Western Sydney – all outside the top eight – over the next month.

Coach Chris Fagan is confident his team can handle Daniher’s absence, despite the key forward being instrumental in the team’s superb start to the season with six wins from seven matches.

“We had 10 goalkickers [against Sydney] – we regularly have 10 goalkickers. We don’t really rely on any one person to score for us,” Fagan said.

“The outcome today is a fairly good one with Joe not requiring surgery on the shoulder, and we can just focus on rehabilitating and getting strength back into it,” Daly said.

“While it is disappointing for Joe to miss a few games after stringing together so many consecutively, we’re confident we have the forward-line depth to cover it whilst he focuses on getting back on the park.”

The Lions said Jaxon Prior had escaped a serious knee injury, confirming it was a cork. He will be fit to face the Eagles.

MCG is ready for 100,000 again, but the ball is in the health department’s court