Rudolf was interviewed on The Matty Johns Show after Sunday’s round one victory against the Dragons and was asked how he could be celebrating the win. 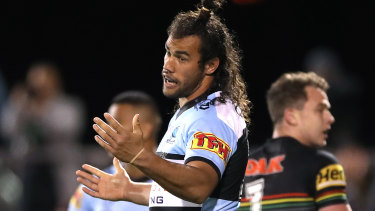 Sharks forward Toby Rudolf has received a formal warning from the NRL.Credit:Getty Images

“We want fan interaction, we want engagement in the game, we want people to love our sport. But we don’t want someone to be themselves,” he said.

“That’s who he is, whether you like it or not, and he was encouraged to be himself with the questions that were asked … so what is a player meant to do?

“Good on him for speaking his mind and being himself. It’s a shame that there’s been repercussions for something that I think for a lot of people would be only looked at as just very light-hearted humour.”

The NRL’s decision to issue a warning polarised fans, with some believing it was heavy-handed.

Rudolf’s comments came in a week when thousands joined March 4 Justice rallies across the country to protest against sexual abuse and harassment of women.

V’landys, chairman of the Australian Rugby League Commission, was quick to back Abdo in his stance on Tuesday.

“The way Andrew handled it was 100 percent correct,” V’landys said. “The way it has been handled from our part is exactly what should happen. To be fair to him he was joking, but it wasn’t an appropriate joke.

“Our thing is – and we will not move from it – you have to respect women … and it’s just not respectful.”

Abdo also offered to speak with Rudolf personally after issuing the official warning.

“It’s clear that those kind of comments are offensive and derogatory to people, and that’s not how we are as a game any more,” Abdo told the Herald. ”He was trying to make a joke, but it’s not appropriate to joke like that. I think he understands and he appreciates those comments are hurtful.”

Eddie Betts in for All Stars

Stalwart Elshaug laid off by Bombers in coronavirus crunch