Melbourne Football Club will have the opportunity to be concurrent premiers in both the men’s and women’s competitions, after Daisy Pearce’s side secured themselves a spot in next Saturday’s grand final, defeating reigning premiers Brisbane Lions in the first AFLW match played at the MCG.

Having never met in a final, the Demons entered the clash off an extended break due to the delayed finals series, but had a six-match winning streak, while the Lions hoped to maintain momentum from a 50-point victory over Collingwood last Sunday.

The Demons had lost just once this year, in round four against minor premiers Adelaide while the Lions had lost two, against Adelaide and Melbourne.

Melbourne went in with one change, draftee Tahlia Gillard making way for Eden Zanker, who returned from a quad injury. 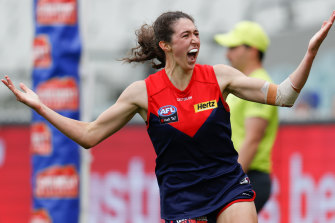 Alyssa Bannan of the Demons celebrates a goalCredit:AFL Photos via Getty Images

It was wet weather footy on the first bounce, Brisbane struggled to get the ball in their forward fifty early on but the Demons didn’t make them pay, not yet anyway.

The pressure was hot from both sides, Brisbane were trying to rush the ball forward but the Demons held their form in defence.

Lion Dakota Davidson missed an opportunity after the first siren to get the first major of the day, seeing them with just one minor to the Demons’ empty scoreboard.

Melbourne’s 50-gamer Karen Paxman had a solid start and led the field with six disposals at the first break, alongside teammate Gab Colvin and Brisbane’s Ally Anderson who had seen an equal amount of the ball.

Alyssa Bannan snapped the first goal of the day with Lion Shannon Campbell hot on her heels.

The rain was making it a ground ball game as Brisbane’s Taylor Smith responded after a rushed entry.

Melbourne were seven clearances up, somewhere Brisbane normally excels but the scores were tied at eight points apiece at half-time.

Dakota Davidson slotted one for the Lions early in the third but was quickly responded to by Demon speedster Bannan.

Just 30 seconds later, Lauren Pearce added another to Melbourne’s tally to put them six points up.

Brisbane were struggling to get past the Demons’ defence and seemed absent around stoppages, however, contested possessions were almost equal.

Eliza McNamara impressively soccered another through for the Demons through Brisbane defence to send them 11 points up at the final break.

The Lions were looking to do something different they moved Greta Bodey up to the wing and Orla O’Dwyer forward, but Bannan found a loose ball to slot her third for the day and increase the Demons’ lead.

Lion Shannon Campbell got on the end of the ball to cut the margin to ten points with five minutes to go.

Brisbane’s Lucinda Pullar left play after a hard fall, her team managing repeated inside 50s but missing their opportunities until Greta Bodey cut the margin to three points with 36 seconds to go, but the home team held on until the final siren.

Demons skipper Pearce said she was “pumped” by the result.

“I’m just so proud of our girls to come in there and keep ticking away, there were no superstars, just people prepared to play their role for four quarters” Pearce said.

Melbourne will face the winner of the Adelaide-Fremantle preliminary final later on Saturday.

Karen Paxman ran out for her 50th game, and is one of just two players to be five-time All Australians (alongside Emma Kearney).

Signed by Melbourne as a priority player ahead of 2017, Paxman has finished in the top three of Melbourne’s best and fairest every year.

For the first time in the AFLW competition’s history, female footballers ran onto the iconic MCG for a preliminary final.

Melbourne first played in the first official VFL match at the MCG in round two, 1897. Club president, Kate Roffey said it was a proud moment to host the game.

“We’re incredibly proud of our women’s program and the athletes who continue to push themselves each week, are now hosting a history-making match at the ’G. The MCG is the home of footy – and it’s no longer reserved for the men’s game,” Roffey said.

Dale Hopgood died after a game of footy. On Sunday, his son makes his NRL debut