Fremantle coach Justin Longmuir won’t be tempted to rush Alex Pearce back from injury for an AFL showdown with Sydney superstar Lance Franklin if the key defender is not fully fit.

Pearce is still “a little bit sore” after he was a late withdrawal from last week’s away win over St Kilda, pulling out of the warm up with a calf issue. 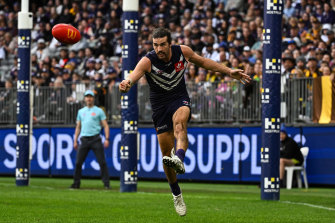 The Dockers remain hopeful Pearce will prove his fitness ahead of Saturday’s crunch clash with the Swans at Optus Stadium.

If not, the task of stopping 1000-goal forward Franklin will fall to Brennan Cox or Griffin Logue.

“He’s a great match-up for Buddy,” Longmuir said of Pearce.

“That won’t override the decision (on whether he plays) though.

“We’ll put Alex’s welfare first and the last thing we want to do is turn this into a longer injury than it needs to be.”

Franklin is out of contract at the end of the season and is playing well enough to continue in 2023.

According to a News Corp report on Wednesday, he is ready to move to another club or retire if Sydney do not increase their offer of about $500,000 for next year.

However, the Swans are confident they will get a deal done.

Longmuir said he hadn’t given any thought to trying to lure Franklin back to WA, from where he was drafted out of WAFL club Perth in 2004.

The 35-year-old champion reached the 1000-goal mark in March and has 34 majors from 14 games this season.

“He leads their goal-kicking and still warrants the same attention that he always has.”

Fremantle sit third on the ladder – just percentage shy of Geelong and Melbourne – after wins over Port Adelaide and St Kilda.

But the pair will have to earn their places in an in-form side.

“We’re going to have some difficult decisions to make,” Longmuir said.

“Chappy played at Peel last week and was one of their better players, and Blake’s been a really strong performer for us this year.

“But we’ve had two pretty good performances the last two weeks and we always like to reward good form.”