The venue’s surface took a pounding last week after two exhibition soccer matches involving EPL clubs and an AFL game were played in the space of three days. 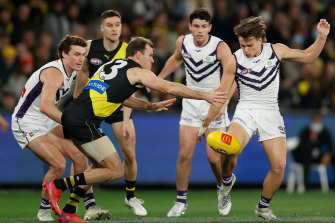 Fremantle’s Caleb Serong kicks the ball during the Dockers’ round 19 draw with Richmond. Credit:AFL Photos

The heavy rain during that stretch of games resulted in the surface becoming muddy and chopped up in certain parts.

Ratten said the surface was shifty under foot when he tested it out before the game and questioned whether a player would have launched legal action if they had suffered a career-ending injury.

Longmuir has come to accept the ground won’t regain its pristine status this season, with the Dockers granted permission to train there on Tuesday so they could adapt to the new conditions.

Two of the goals West Coast conceded during the last quarter against St Kilda came when players slipped on the surface and Longmuir says his team simply need to learn how to adapt.

“The wing that doesn’t get a lot of sunlight is getting a little bit heavy and chopped up. The outer side is fine,” Longmuir said.

“The surface out here (at our training base in Cockburn) is pretty pristine and guys can get away with any footwear they want. That’s not ideal preparation.

“So training [at Optus Stadium] yesterday was about giving our players the best preparation to perform.

“It’s really hard for them to get it pristine again before the end of the season. We need to get used to it.”

Longmuir is also confident Rory Lobb will be fit to return from a shoulder injury against the Demons.

But he remained tight-lipped when asked whether Lobb had approached the club to inform them he wanted to be traded.

“It is where it is,” Longmuir said of Lobb, who is contracted for next year.

“We’ve commented on it plenty of times. I’ve stated my stance on it and that’s where it’s at.”

Fremantle will enter Friday night’s match without Nat Fyfe, who is set to miss two to three weeks with a hamstring injury.

The Demons have lost five of their past eight matches, but Longmuir says the defending champions remain a potent force.

“They kicked 74 points in the first half last week (against the Western Bulldogs), which is dominant,” Longmuir said.