The Western Bulldogs came out on top by three points after a four-quarter slog at Ikon Park on Friday, leaving Fremantle winless this season.

Gabby Newton’s goal with eight minutes left in the final term was enough to get the Bulldogs home 3.5 (23) to 3.2 (20) after the Dockers, who had something to prove after being held to the lowest score in AFLW history last week, led at the final change. 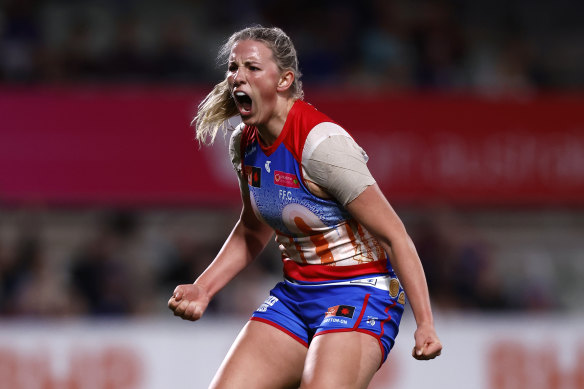 Gabby Newton celebrates after scoring for the Western Bulldogs.Credit:Getty Images

Bulldog Rocky Cranston opened the scoring for the second week in a row, but Aine Tighe found one for Fremantle before the first break.

Tighe was again critical in a goal from her Dockers’ teammate Dana East early in the second.

Fremantle were controlling the game but still only had the two majors. Bulldog Rylie Wilcox then slotted an impressive first AFLW goal on the run.

The Dockers locked the ball in their half most of the second term, but the Bulldogs were strong in contested marks. 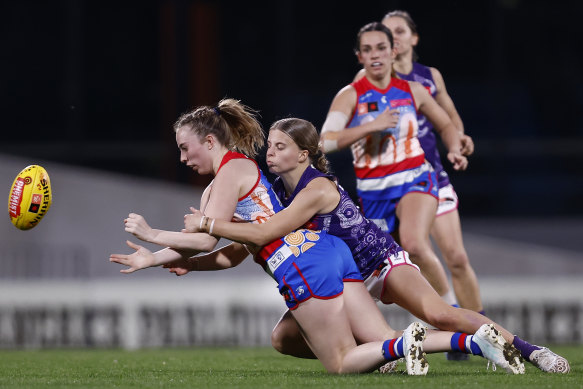 The Bulldogs’ Sarah Hartwig handballs during the clash with Fremantle.Credit:Getty Images

Kirsty Lamb was prominent, while Kiara Bowers was clinical for Fremantle with 11 disposals and six tackles in the first half as her team went into the half-time break a point ahead.

Former college tennis star Megan Kauffman booted one for the Dockers in the third to put them seven points up as the game became an arm wrestle.

The Bulldogs managed more time in their forward 50, but 11 inside 50s produced two behinds.

Fremantle finally showed the defensive pressure they are known for, remaining five points up at the final break. Bulldog Ellie Blackburn’s long shot was painfully touched by a teammate, but Newton’s goal gave them the lead for good. 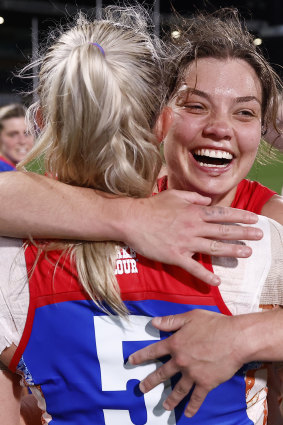 BLACKBURN’S MILESTONE
Blackburn became the Bulldogs’ first 50-game player. The 27-year-old marquee player, has three club best and fairests to her name. Her first game was also against the Dockers.

Blackburn said she was proud of the team’s performance. “The courage and bravery that our group was able to possess throughout the week and in today’s game, it was a pretty gutsy effort,” she said.

“A win like this today gives us a world of relief, we haven’t beaten Freo in a few years so to get a win today sets us up really nicely for the season, I’m bloody pumped.”

INDIGENOUS ROUND
Both sides ran out in dedicated Indigenous-round guernseys. Fremantle’s is based on the Mikayla Morrison and Des Headland design that was also used for the men’s AFL jumper last season.