Essendon’s boom off-season recruit Jye Caldwell has had a nightmare start to his four-year, big money contract at the Bombers with the club confirming he has suffered a hamstring injury that will keep him out for months.

The 20-year-old Caldwell – who was pick No.11 in the 2018 draft and joined Essendon from GWS in the off-season – has had a long history with hamstring injuries, including tearing one in his draft year and then suffering a strain while in Sydney in 2019. 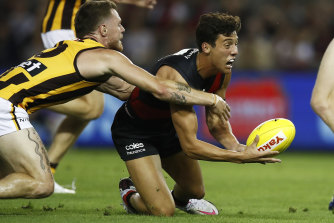 Jye Caldwell has been sidelined with a hamstring injury.Credit:Getty Images

The club said midfielder Shiel (knee) would have an arthroscopy in the coming days and would miss four to six weeks of football, ruckman Draper (ankle) would miss eight to 10 weeks, while new recruit Caldwell (hamstring) would miss six to eight weeks.

“Dylan will be required to have a knee arthroscopy and we will know more about the time-frames for his return following this procedure over the coming days. At this stage, we don’t anticipate he will return to the field for at least the next four to six weeks but we will continue to monitor him closely this week and see how he progresses,” Mahoney said. 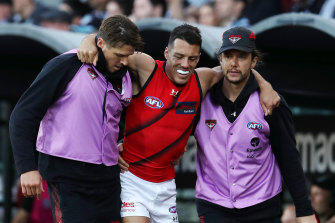 Dylan Shiel is helped to the bench on the weekend. Credit:Getty Images

“Sam will see a specialist in the coming days with confirmation of a syndesmosis injury, but we are hopeful he will be back and playing for the second half of the season.

“Scans confirmed that Jye sustained a more significant hamstring strain, and we will see how he progresses over the next week but, unfortunately, we expect him to miss the next six to eight weeks of football.

“While these injuries are disappointing and will test our depth over the coming weeks, it provides opportunities for others to step up and contribute strongly to our side this weekend and beyond.”

The Bombers hunted Caldwell through 2020 after he struggled for opportunities to play in the Giants’ star-studded midfield, only managing 11 games across two seasons.

Shiel’s leaves Essendon short a high-class, experienced player when the team can ill afford to lose those of that calibre, while Draper is one of few ruck options at Tullamarine.

The retirement of Tom Bellchambers means the responsibility will either fall to Andrew Phillips or the inexperienced Nick Bryan. Peter Wright could also play ruck if needed.

Draper is one of the Bombers’ most exciting prospects and made his return from a knee reconstruction last year.

The Bombers are hoping to re-gain Dyson Hepell and Jack Stringer for this week’s match against St Kilda, which would be a slight consolation for their midfield.

Essendon have started the season with two losses, a drubbing to Port Adelaide and a one-point loss after leading by 40 against Hawthorn in round one.