Beset with injuries and facing a prospective 0-3 start to 2021, Essendon will be buoyed by the return of explosive forward Jake Stringer and the probable debut of top 10 draftee Archie Perkins.

Hurt by the loss of key players Dylan Shiel and Sam Draper and recruit Jye Caldwell, the Dons will regain Stringer, their most potent forward after he missed the opening two games as he recovered from achilles issues, and are expected to select Perkins for his first game in their match against St Kilda, making him the second of Essendon’s top 10 draft picks from 2020 to play seniors, with tall utility Nick Cox having played both games. 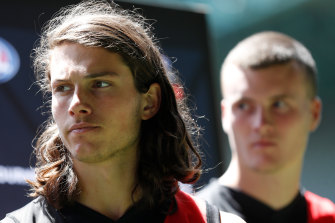 Perkins, selected at pick nine in the national draft, is a 188-centimetre midfielder who can play forward and had a knack for kicking goals in the NAB League for the Sandringham Dragons. He has been described by the club as “confident”.

The third top 10 pick, Zach Reid, a key defender, is also a chance to be blooded soon in what the club has defined as a development year – a process that seems certain to be fast-tracked by the injuries.

Skipper Dyson Heppell, who suffered a back spasm and withdrew from the team that was beaten soundly by a powerful Port Adelaide, is rated no better than a 50-50 chance to resume against the Saints.

While the loss of Draper and potential unavailability of seasoned back-up ruckman Andrew Phillips mean Essendon’s ruck brigade will be weakened, their opponents, the Saints, will be without Paddy Ryder, veteran ruck and ex-Bomber and emerging gun ruck Rowan Marshall, who the Saints hope will play a half in the VFL.

If Phillips doesn’t play, the Dons can bring in young ruck Nick Bryan and also deploy Peter Wright, recruited as primary a key forward, in the ruck for periods.

Essendon started the season light on for seasoned key-position players, due to the hip problem and infection suffered by their premier key back Michael Hurley and the loss of Joe Daniher to Brisbane, plus the absence of James Stewart (hamstring), who can fill a hole at either end.

Without Daniher – who admittedly seldom played since 2017 – and Orazio Fantasia, Stringer is viewed as the primary scoring threat remaining in the Essendon side.