The sight of Adam Reynolds being mobbed by his South Sydney teammates after he launched a monster 43-metre field goal – the NRL’s first two-point field goal – summed up what the captain still means to the Redfern club.

If Reynolds was getting bogged down by the intense speculation about his future at Redfern, he certainly was not showing it as Souths triumphed 35-6 over the Broncos. 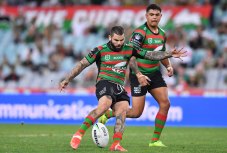 Souths have now made it four wins on the trot, and on paper should make it five when they host the Wests Tigers next Saturday.

The Reynolds contract saga has ramped up in recent days with Souths refusing to budge on their one-year offer with a second year in their favour.

Reynolds showed against the Broncos that he remains an influential halfback. The more Souths win and better Reynolds plays will only help the star No.7 as he looks for a long-term deal after being denied it at Redfern.

Alongside Reynolds, Mitchell roared to life in the second half with a couple of tries, a field-goal and some powerful runs.

Souths were also given a glimpse into their long-term future with Dean Hawkins, a 22-year-old rated one of the leading halfback contenders to take over from Reynolds, making a late cameo.

Cheered on by a healthy group of friends, Hawkins made the most of his 14 minutes, hustling in defence and chasing his own 40-20 attempt to pin Jamayne Isaako deep in his own end of the field.

Souths coach Wayne Bennett will never tire of beating up on the Broncos, and it looked like being one of the easier victories against his former club when they raced out to a 10-0 lead with early tries to Marshall and Alex Johnston.

The Broncos did well to muscle up and get themselves back into the game.

But the visitors could not match it with their rivals for any sustained period. Payne Haas had a red-hot go up front, while Tom Dearden had his moments. Things will not get any easier when they host Penrith next Thursday.

The Rabbitohs running up a lead allowed Bennett to give Damien Cook another early mark with Marshall, who started the game at five-eighth for the suspended Cody Walker, shifting to dummy-half to accommodate Hawkins. Up front, Tom Burgess clocked up more than 200 metres, including 90 metres in his first stint.

It was a busy night in the Sydney Olympic Park precinct with the Easter Show and Sydney Kings NBL game also being held, along with a fireworks show that was easy to see at one end of the ground in the first half.

‘NRL did not follow its own rules’: Ex-Storm directors in fresh appeal of cap penalty

Rivals hope Chooks choke but captain Boyd has other ideas