Home » Rugby » ‘Dust ourselves off’: Cats look ahead after ‘diabolical’ loss

It was one of those horror nights where everything that could have gone wrong did go wrong for Geelong.

That was the view of coach Chris Scott who didn’t mince his words when assessing the fumbling, bumbling Cats’ shambolic 43-point qualifying final loss to Port Adelaide.

A “diabolical” dearth of forward pressure, an inability to corral the Power’s slick waves from defence to attack and error after botched error in defence all conspired to relegate Geelong, again, to taking the scenic route towards the last day in September.

“It was a poor performance,” Scott said.

“Some of our ball use was uncharacteristic; it wasn’t anything to do with their [Port’s] pressure, we just kicked it to them and gave them some really open looks in their forward 50.

“We had three forward-50 tackles for the night, which was diabolical, really. 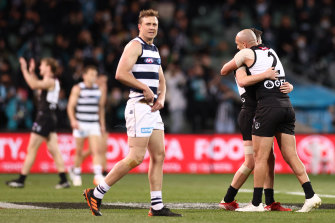 “We kicked it to them in our back half, which is uncharacteristic, the ball bounced out of our forward half, and we didn’t challenge their intercept defenders and ground-level players well enough.

“Virtually everything that could go wrong did go wrong throughout the course of the night.”

The defeat was the Cats’ seventh in the first week of finals from their past eight seasons – and their second in as many years at the hands of the Power – but Scott refused to concern himself with historic trends.

“I don’t really engage in it,” he said. “We try to look forward … I think we have got three players on our list from 2011, so it’s been a complete transition.

“I don’t think there’s any need for me to focus on stuff that’s in the past.

“The reality is right at the moment we weren’t good enough in a really high-stakes game.

“We’re in the position because we’ve been good enough during the year, that we can dust ourselves off and go again.”

The Cats will almost certainly be without tagger Mark O’Connor for next week’s semi-final against the winner of Saturday’s Sydney-GWS elimination final.

O’Connor injured his left hamstring in the second quarter on Friday night – the same hamstring that saw him miss six weeks earlier this season.

“Too early for us to assess … I would assume it’s going to be a challenge [for O’Connor to play again in 2021], but I’m only assuming,” Scott said.

“But the good news is we’ll have Zac Tuohy available this week.”

Meanwhile, Port coach Ken Hinkley feels his side is better placed than this time last year when they advanced to the preliminary final at Geelong’s expense, only to fall to Richmond once they got there. He knows the job isn’t done yet.

“I got asked a bit during the week, ‘Are we better or are we better placed’,” Hinkley said.

“I just knew we were more experienced and better prepared to play the type of football that finals football is.

“Did I expect us to be as clean and as strong as we were tonight? Maybe not, but I’m pretty happy that we did.

“We have been in really good form for a good period of time … I think in some ways the boys were certainly ready for tonight and the contest.

“This is a bye [next weekend] that benefits us, clearly.

“It gives us a great opportunity – but as we saw last year, the opportunity has still got to be maximised.”

Crowd caps set to increase for AFL games in Victoria