Manly centre Dylan Walker has been fined $10,000 by the NRL and handed a one-game suspension after assaulting a pizza shop worker in Sydney’s northern beaches last year.

Walker escaped conviction and was handed an 18-month good behaviour bond when he pleaded guilty to the charge in court earlier this month. 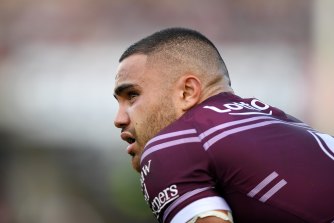 Court documents also revealed coach Des Hasler went to Manly police station at 1.15am after the incident to act as a support person at the request of Walker.

Walker was originally charged with two counts of common assault, but the second charge was withdrawn by police.

As part of the court order, Walker must undertake regular drug and alcohol counselling and see a psychiatrist which he was already doing ahead of his sentence. He must also not re-offend.

Meanwhile, Jamil Hopoate’s case was back in court on Monday after the former NRL player was charged with drug supply.

Hopoate was charged after an investigation into the importation of cocaine with a street value of $154.2 million with police alleging the ex-Bronco fled on foot and was chased by officers while holding an 8kg substance in his backpack.

Hopoate was handed a new court date to bid for freedom on Monday in the Supreme Court after his bail was originally refused in Sydney’s Central Local Court. His application was knocked back despite his brother, Bulldogs star Will Hopoate, offering his house up to the value of $50,000 as a surety.

Hopoate’s lawyers will again bid for freedom on July 1.