Home » Rugby » ‘Equivalent of Patrick Cripps’: The Victorian likely to go No.1 in the AFLW draft

There’s always one burning question ahead of the AFLW draft: who will be the No.1 pick?

Last year, it was Charlie Rowbottom, who went to Gold Coast after nominating Queensland as her state of choice, and the year prior, it was midfielder Ellie McKenzie from Melbourne, who landed at Richmond and took out the Rising Star and 2021 league’s best first-year player.

This Wednesday, it’s likely to be Victorian Montana Ham, a strong-bodied Western Jets midfielder who has been likened to Carlton star Patrick Cripps. 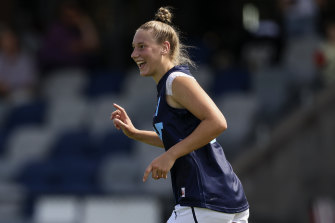 Montana Ham has starred for Vic Metro but is likely to join the Swans.Credit:AFL Photos

Ham, who has nominated for the NSW draft zone despite being from Victoria, is all but certain to become a Swan.

Her credentials would have her firmly placed in the top few picks but given the expansion club from NSW has the prized No.1 selection, the 18-year-old is in a good position to go first on the night and give Sydney’s list a good boost ahead of their inaugural season.

The 179-centimetre Ham recently won the Vic Metro MVP and best on ground in the AFLW Academy game. She also played in the under-23 All Stars game earlier this year, where she booted two goals in two minutes and finished with 19 disposals, four clearances and five marks.

“When she gets space, she’ll take you on with her legs and she’s got a booting kick on her,” Chancellor said.

“She’s an incredible contested-ball player, whether that be in the air or ground level. She’s got such a good profile in terms of her height and size, but she’s got the ability to play at ground level as well as key position player, which is quite a unique blend in the women’s game.”

“She might not be quite as skillful by foot as some of the other girls … but the strength she does have, her marking is as good as there is anywhere in the country at under-18 level, and she’s already got the body to compete against the older women in the AFLW.

“She’s the most ready-to-go prospect in it [the draft pool].”

Given the part-time, semi-professional nature of the AFLW competition, draft prospects have the choice of nominating the state in which they want to play, which means most choose to remain in their home states.

Considering this, Victorian expansion clubs Essendon and Hawthorn were rumoured to be interested in selecting Ham. However, the onballer chose to head to the harbour city instead, which AFL Women’s reported was due to lifestyle and university options, including wanting to pursue a degree in physiotherapy.

Kevin Sheehan, AFL talent ambassador, said given her height and midfield ability, Ham was “ the equivalent of Patrick Cripps”.

“A tall midfielder that covers the ground so well, marks overhead, collects the ball, is a prolific ball winner, [has] got a real competitive streak through her, so she’s got all the assets that very tall midfielders have.

“It’s quite unique in fact, her ball-winning ability. [She] dominates games, did so for the Western Jets, who won the premiership, had a major impact there and then topped off her year with a brilliant game when the Australian under-18 girls played an All Star opposition [game] … and she won the best player that day as well.

“She’s a unique talent and going to be a very special player at AFLW level.”

Lewis Hamilton may cost Mercedes over £8,000 this season due to a simple penalty