Following the 2019 season the Bombers announced that Ben Rutten would take over as Essendon's senior coach for 2021 and beyond in a coaching succession plan. 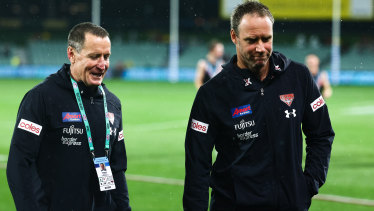 John Worsfold and Ben Rutten during the Bombers’ loss to Port Adelaide on Saturday. Credit:Getty Images

This season Rutten has effectively been in charge of the side but Worsfold has continued to front the media as head coach. Lloyd and Worsfold have clashed over the past couple of weeks, with Lloyd criticising the Bombers' progress and Worsfold defending the club.

"Thank you for taking over . . . when the club was in a mess after the supplements saga, but I think they should have ended John's tenure 12 months ago," Lloyd said on The Sunday Footy Show.

Worsfold last week said Lloyd's earlier criticisms of the Bombers were not coming from him as an “Essendon champion” but rather as an “opinion-maker … who needs to earn his pay.”

But Lloyd said many agreed with his critiques: "I have never had so many Essendon people get in touch with me to say 'thank you' for showing some passion, because there is no passion … there is no emotion, there is no conviction.

"The mixed messages. They are at their wits end and for him to come out yesterday and talk about, you know, 'where we are at, we are a young team, we are this, we are that', it was just another piece of John just confusing everyone with his mixed messages."

The five-time All Australian said the Bombers weren't playing the way those in charge of the club said they should be, citing a conversation on radio with footy boss Dan Richardson on Saturday.

"What is the identifiable brand for Essendon? What can Essendon supporters be looking for?," Lloyd asked Richardson.

"This was the response [from Richardson]," Lloyd said. "'A brand of footy where we are well connected between defence and attack, play more ball in the forward half, setting up behind it and putting good pressure around the ball'.

"Essendon are ranked 14th for time in [forward] half and 15th for pressure. There is nothing that's identifiable for what they are saying they want to play," Lloyd said.

The Bombers could finish as low as 14th, depending on how remaining games fall.

“No one team has any more right to be successful quicker than any other team, just because they’re a big-name club.”

Essendon have seven losses, one draw and one win from their last nine games.

The future of out-of-contract star forward Joe Daniher remains up in the air, while Tom Bellchambers is also out of contract heading into 2021.

Veterans Cale Hooker, David Zaharakis and Michael Hurley are still contracted to the club in 2021. Hooker, 31, was dropped for the Bombers' last match.

Tigers greats call for club to stand down Packer and Reynolds