There is a hand reaching down from heaven, holding an ox’s heart. The voice of Tom Raudonikis comes like a gravelly landslide: “You c—s don’t have one, so touch this”.

It’s a stunt Raudonikis used to pull on teams he coached, and it would be fitting if he now addressed the NRL. Where does your heart lie now, and if you can find it, what are you c—s going to do about it? 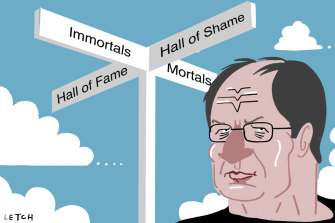 What we hear more of are those escapades that the league is trying to wipe from the game. Paradoxically, the Raudonikis who scares the mums away is the one who is being so fondly remembered. There was his ability to play on while repeatedly concussed. (The “toughest” player many have seen.) There was his extreme brutality in an age of brutality, his preconceived punches and swinging arms and orchestrated all-in brawls. (Cattledog!) There was his fondness for drinking himself into incoherence and smoking his way to the doctor’s surgery. (A love of the sponsors’ products.) There was his unfiltered, occasionally unhinged honesty. (Integrity that predated integrity commissions.)

League is an inclusive game now, but one type it will not include, under any circumstances, is the Raudonikis type. Its tolerance of “characters” is so low that it won’t cop a player making a self-parodic joke before heading for the ice bath. Characters like Tommy are still encouraged, but only on condition that they are retired or deceased.

The selective memory, the inability to make peace with its own heart, is not just a case of “times have changed”. Some of those antics were not accepted then, let alone now. Raudonikis’ one-time Kangaroos teammate, Freddy Jones, who passed away last month, had a party trick when drunk of throwing up and then eating it with a knife and fork. Even in the early 1970s, that kind of thing could get you marked never to tour again. It’s like Hey Hey It’s Saturday: you can’t excuse every atrocity of the past by blaming the past itself. The past had its own standards; it didn’t lack standards completely. I remember a friend asking Raudonikis for an autograph and the great man signed the program “Tom Terrific″⁣. My friend, perhaps failing to appreciate levels of irony from his hero, decided he was a wanker. 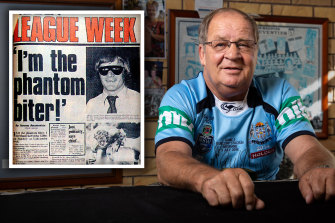 One of Tommy’s best was outing himself for nearly biting off the nose of Manly debutant John Gibbs.Credit:Paul Harris, Rugby League Week

The game’s heart remains at issue. When was it not? The present sometimes fails recognise that the past was also complicated. Simpler times? Only for chronic simplifiers. Tommy was, during his retirement, marketed as another league product, a clownish throwback to appeal to nostalgia lovers, to persuade us that the game still had its heart and soul. Tommy was cluey enough to ride with it and make something out of it. This campaign managed to sanitise the product enough to appeal to voyeuristic middle-class audiences wanting a taste of rough trade, while also referencing enough truth to please the authentic Newtown or Wests fan. League’s ability to transcend class differences, through a character like Raudonikis, remains essential to its broad appeal.

What does the commodification of Tom Raudonikis tell us about today’s NRL?

For many, his passing underscores how long ago the game lost its soul – even if that soul was drenched in beer, stinking of gaspers, staggering around toothlessly from a smack in the chops while conspiring to administer summary retribution.

Others are grateful for the passing of that era. Tom Raudonikis would hardly inspire today’s mums into registering their little boy or girl in a league team.

Within the league community, there is a genuine respect. I loved Craig Bellamy’s summation of Raudonikis as someone who hit the ball up like a prop forward and tackled like a back-rower. That workrate wouldn’t be allowed from a halfback today either, at least not by his coach or his agent protecting his “halfback money”. 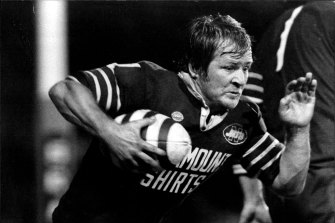 Often overlooked is that Tommy Raudonikis was a very good player.Credit:Fairfax

You can’t help wondering what the confused young player of today would make of it all. Here they are, schooled in healthy living, frightened within an inch of their lives of saying what they think or doing what they want, seeing a drinkin’, smokin’, swearin’ thug lionised as “everything that makes rugby league the greatest game of all”.

What is the current player to make of that? Are their current indiscretions going, at some future date, to be repackaged as the stuff of fond tribute? Stealing someone’s laptop, posting a revenge-porn video, getting in a fight at a church dance, jumping into a stranger’s car, hanging out at the casino with gangsters, performing the bubbler, making sweet sweet love to a poodle . . . are these crimes, or the material for stirring and hilarious funeral orations? Raudonikis’s passing shows how much is in flux. As a meeting place of different cultures, league is one part fusion, one part confusion. The heart isn’t the only vital organ it is searching for.

Raudonikis could be a hero for all the talents he shares in common with today’s best players: his courage, his will to win, his speed and skill, his grit. Yet he is also a hero for representing all that league has lost, or thrown out. If he’s looking down from above, we can imagine what he would think of all the important people making speeches turning him into something he wasn’t. What his friends agree on unanimously is his allergy to hypocrisy and his candid willingness to take a risk and be himself. They don’t make such individuals any more; they’re not allowed. He was indeed, as V’landys says, “one of a kind”. That is something for today’s rugby league to mourn.

Trent and Brooke Cotchin doing it ‘tough’ after protocol breach