This was hugely impressive from Leicester Tigers as they sealed their play-off place and Chris Ashton moved joint top of the Gallagher Premiership’s all-time try-scorer list with two crucial tries.

Steve Borthwick rarely cut a happy figure in the coaching box, but deep down the Tigers boss must surely have been delighted at what he saw.

Not many teams make Exeter look ordinary at Sandy Park. That is exactly what Leicester did in the first half as they had 71 per cent of the territory. 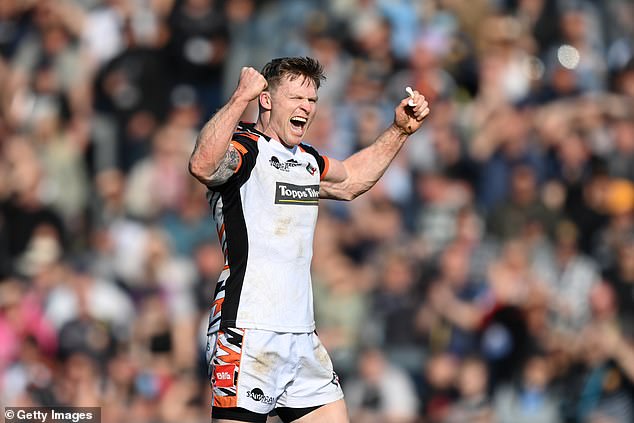 Ashton’s 91st and 92nd Premiership tries meant he moved past Mark Cueto and level with Tom Varndell at the top of the tree.

That is a fine achievement, but also must not detract from the strength of Leicester’s collective. They stretched their lead at the top, finalised their top-four place even though we are still only in March, and also put a huge dent in Exeter’s play-off push.

Leicester even had to cope with losing George Ford to an ankle injury, but they did far more than just survive without him. Borthwick is doing a fine job, one which could yet catapult him back to England as Eddie Jones’ successor post the 2023 World Cup.

Leicester’s immediate intent was as obvious as it was impressive.

Ford turned down three straight offers to kick for goal instead of opting for the corner. On the third of those occasions, Leicester’s attempted driving maul was stopped in its tracks.

No matter. Ben Youngs helped find Ford whose cross-kick to Ashton gave the veteran winger the easiest of finishes. Praise too for Ford’s assist which was sumptuous.

Ford’s conversion wasn’t quite as good as it rebounded off the post.

The early pace of the game in the Devon sun was ferocious. Exeter tried to respond. But their breakdown work wasn’t quite on point and they conceded six penalties in the first quarter.

Referee Luke Pearce wasn’t messing about. He marched Leicester back an extra 10 metres after they had conceded a penalty and Dan Kelly hurled the ball to the floor in frustration.

Pearce then yellow carded Exeter’s Jacques Vermeulen for a deliberate knock on and marched Leicester back once more for back chat, Ford getting his team out of trouble with a 50:22 kick in between those two incidents. Ford then caused chaos with another chip ahead.

He stayed down after putting the kick through, but Youngs took over. This time it was the scrum-half who put boot to ball. Criminally, Exeter let the ball bounce. Olly Woodburn failed to deal with it and Freddie Steward was given a try on a plate. Kelly converted while Ford was treated.

Ford tried to battle on, but couldn’t continue and Freddie Burns came on. It was Leicester’s first real setback of the day, but their pack was dominant.

Exeter’s struggles were summed up just before the break. Ashton was penalised for a dangerous tackle and Joe Simmonds turned down a simple penalty in favour of the corner. 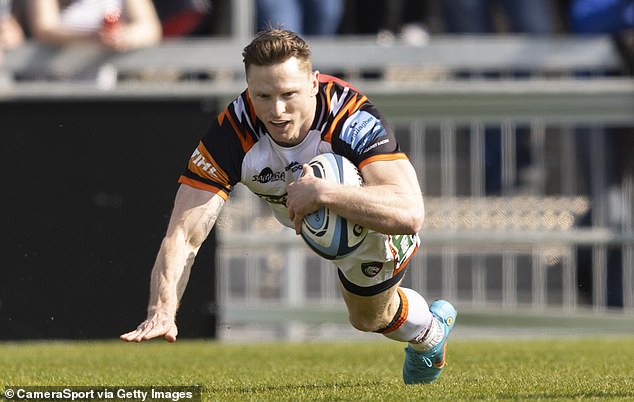 Ashton, 34, opened the scoring when he ran over after just six minutes at Sandy Park 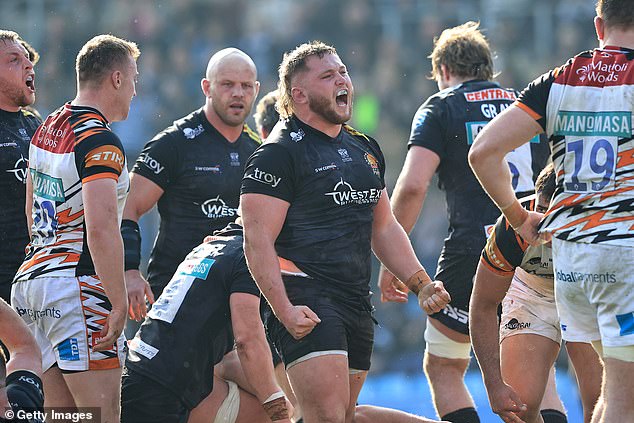 Steward brilliantly stopped the kick reaching touch and then Leicester held Exeter up over the line to go the break 12-0 to the good.

Leicester hooker Julian Montoya continued his immovable object impression when the game resumed to win his team a penalty and then came another moment to remember for Ashton.

Exeter attacked from deep, but the move broke down. When the ball fell loose, Ashton’s finisher’s eye lit up. He picked up possession and raced to the line, Exeter rookie Josh Hodge unable to stop him. Burns nailed the kick and a shell-shocked Exeter crowd couldn’t believe what they were saying.

Leicester did lose giant wing Nemani Nadolo to the sin bin for another deliberate knock on.

Exeter needed to hit back and they did. Dave Ewers crossed from close range and Simmonds added the extras, but they needed far more than that. It didn’t arrive.

Burns stretched Leicester’s lead with a penalty. Exeter kept going and their effort could not be questioned, but this season they don’t seem to quite be firing on all cylinders. 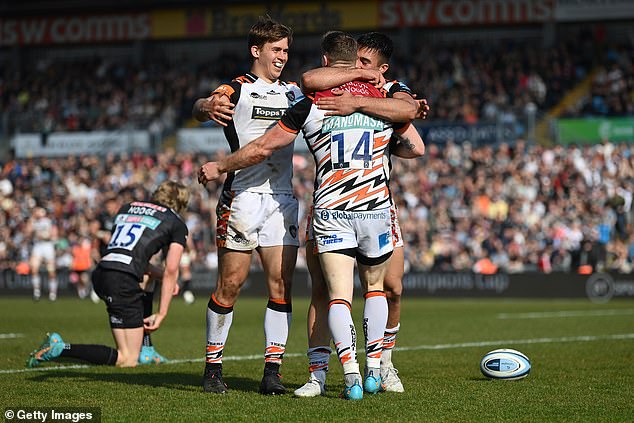 Patrick Schickerling crossed close to the posts for a converted try and Simmonds kicked a conversion and a penalty to ensure a losing point.

Exeter even pushed for what would have been a remarkable comeback win late on, but Jack Yeandle’s line-out went all wrong.

Leicester might have been hanging on, but they deserved to win.

Coroner says he could step aside in Shane Tuck inquest