London: Australia’s boycott of the Rugby League World Cup over safety concerns undermines the case for making the code an Olympic sport ahead of the 2032 Brisbane Games, the furious chairman of Rugby Football League says.

Simon Johnson also predicted NRL stars would be in revolt over Thursday night’s “selfish, parochial and cowardly” boycott and warned organisers were now grappling with whether to cancel the whole tournament.

The Australian Rugby League Commission and New Zealand Rugby League said the decision was based on the risk of COVID-19 in host nation Britain and the amount of time players would need to spend away from home to comply with quarantine requirements.

“The majority of NRL players are currently living away from home under difficult biosecurity protocols,” ARLC chairman Peter V’landys said in a statement.

“They would then be required to remain under protocols and away from home for the duration of the tournament before again quarantining on return to Australia. This is too much to ask our players and officials to do.”

However Johnson said women’s and wheelchair players due to represent Australia had become collateral damage.

“The iron is not lost on me that Australia, having just been awarded the Olympics and Paralympics – events that show total equality in gender and ability in sport, makes a decision less than 24 hours later in which they basically undermine the future growth of women’s and wheelchair rugby league,” he told The Sydney Morning Herald and The Age. 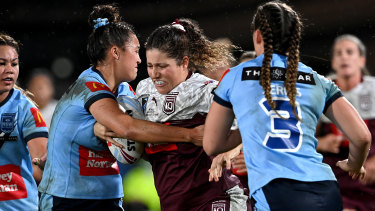 Women’s and wheelchair rugby will also be affected by the decision.Credit:Getty

“These are versions of our game that were poised to take the next leap into growth. Those athletes have been training and training because this was their moment.

“And so the nation that is going to host the Olympics, that believes rugby league should be a sport at the Olympics, turns around and says it’s not willing to participate in a tournament in England despite being given every assurance about safety at considerable expense not to them, but to us.”

World Cup organisers had agreed to provide charter flights for players and officials from the southern hemisphere and a special quarantine facility at Sydney Olympic Park had been discussed for the mandatory two-week isolation period returning home.

“We’re in July right now, this tournament is in October and in the intervening period Australia and New Zealand are in Tokyo and Australia’s rugby union team will be in England,” Johnson said.

“Why are assurances on safety not good enough for our sport?”

Nearly nine in 10 adults in the UK have received one vaccine dose and seven in 10 the full two doses.

World Cup officials spent Thursday locked in crisis meetings following Australia’s announcement, which they were notified of just 10 minutes prior to it being released.

“We’re right in the window where we’ve got to make a decision,” Johnson said.

“It’s a decision for the World Cup board but none of the options are particularly palatable. It’s what is the least worst option. Going ahead without two of the semi-finalists in the last men’s tournament is not ideal.

“Postponing to next year [puts the tournament in a] congested international schedule. With a Commonwealth Games next summer and the FIFA World Cup in November, you don’t have access to stadiums that are hosting it this year.

“And cancellation will mean you’re taking it away from the players altogether.”

Australia had been pushing to have the tournament delayed until 2022 but Johnson said that was never realistic.

“I’m not sure from a COVID perspective what’s going to be different in 2022 that isn’t here in autumn 2021.

“Until the opening game kicks off I think there’ll be more twists and turns in this. This appears to be a final blow but I’m interested to hear what players and coaches are saying. I’m seeing signs that there is a backlash building in Australia.”

All Blacks on the brink of $360 million American revolution