The AFL has revealed the venues and times for round 18, with Collingwood and Port Adelaide clashing on a Monday night at the Gabba in the final game of the home-and-away season, a match that could decide whether the Magpies make the eight.

The Magpies, currently holding onto a top-eight position despite some very patchy form, play Gold Coast on Monday night before taking on the top-of-the-table Port Adelaide in what shapes as an end -of-season nail-biter. 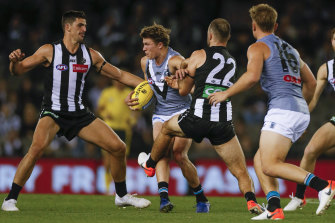 Seven final-round matches will be played in Queensland, with North Melbourne and West Coast kicking it off on Thursday night at Metricon Stadium before the Giants and St Kilda meet in a huge Friday-night clash.

With both teams in the mix, Saints fans will be glued to the screen, with their team possibly needing victory over last year's grand finalists to reach their first finals series since 2011.

Defending premiers Richmond travel to Adelaide to meet the bottom-of-the-table Crows on Saturday afternoon while Geelong have been spared a trip to Cairns, instead meeting the Swans at Metricon Stadium.

Brisbane remain at the Gabba for round 18's game against Carlton while Essendon or Melbourne are likely to be aiming for a consolation win at Metricon Stadium on Saturday afternoon.

Hawthorn wind up a disappointing season against Gold Coast in Adelaide while the Western Bulldogs have been set a tricky assignment as they head to Cairns to play the improving Fremantle, who have made hard work for their opposition this season.

Monday night's clash between Collingwood and Port Adelaide will be a mini-celebration for the competition as it will signal the end of the 144-game home-and-away game campaign that seemed so unlikely at the end of March.