Despite having finished top 10 in the Giants' best and fairest last year as they charged into their first AFL grand final, opposition clubs are starting to factor Jeremy Finlayson in as a potential trade target.

The 24-year-old lost his spot after round 11 to emerging forward Jake Riccardi, who has kicked six goals in his first two games and earned a Rising Star nomination for his performance against Fremantle.

Out-of-contract at the end of this season, Finlayson has started to loom as a possible target for clubs who saw him turnaround his career in 2019 when he kicked 44 goals playing as a ruck-forward. 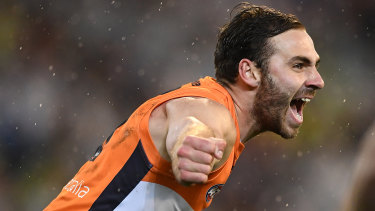 However, despite not being selected, the Giants have given no indication they would be prepared to let him go having been in talks to retain him beyond 2020 following the season restart.

The Giants have two veterans in Shane Mumford and Sam Jacobs in the ruck and used Harry Himmelberg at forward stoppages against the Dockers, but they have not got a huge range of options to play Finlayson's role.

They have a number of priorities in free agents Jeremy Cameron and Zac Williams as well as promising young midfielder Jye Caldwell to secure, with clubs interested in the trio if they choose to depart GWS.

Finlayson did not garner much interest when he declared himself available at the end of 2018 and he stayed with the Giants on a relatively modest two-year deal, however clubs say his 2019 performance made him a much more attractive proposition albeit as a second or third forward option.

He was also impressive at the beginning of this season and before he was dropped was one of the few players to have kicked a goal in every game up until round 11.

Riccardi has been a revelation since being drafted, having performed well for Werribee in 2019, with Lions' great Jonathan Brown describing his leading patterns as more impressive than Cameron.

Martyn Williams: Wales games behind closed doors would be ‘surreal’