Cronulla enforcer Dale Finucane fears players will be sidelined for “accidental head clashes” after he was suspended for two matches for a hit that left Penrith rival Stephen Crichton heavily concussed and requiring emergency surgery to save his left ear.

The lock pleaded not guilty to a grade three dangerous contact charge and risked missing three games had he failed in his bid to clear his name at the judiciary hearing on Tuesday night.

He was originally found guilty, but his lawyer Nick Ghabar immediately sought a downgrade to the charge. He said the contact was “low-level carelessness”, and the gruesome photo of Crichton and his split ear “was graphic, but it [the injury] can’t be seen as serious”. Finucane was eventually found guilty of a grade two dangerous contact charge. He will miss games against South Sydney and St George Illawarra.

Finucane said he thought he was a big chance of avoiding any sanction because of the accidental nature of the tackle – but the punishment meant other players were now on notice.

“I was quite surprised with the outcome given it was an accidental offence and given our game hasn’t seen anything sanctioned before for accidental contact,” Finucane said after the NRL judiciary decision on Tuesday.

“I was optimistic coming in today. I didn’t think the laceration would come into it. Every week players from other sides, and myself included, have had a number of lacerations as a result of accidental head collisions [which] have gone unsanctioned in the past. 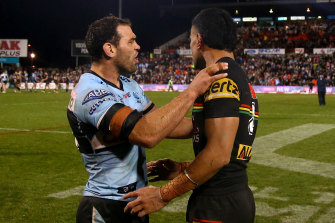 Dale Finucane looks at the ear of Stephen Crichton.Credit:Getty

“Obviously moving forward they will be sanctioning those offences.”

With less than 10 minutes remaining in Saturday night’s game, and with the Sharks trailing by four points against Penrith, Finucane said he had the perfect opportunity to limit Crichton’s run metres by “coming up out of the line hard at him”.

“I empathise with what happened to Stephen, I have spoken to him since, but I wouldn’t change this scenario where I came out of the line to try and change the momentum of the game,” Finucane said during the hearing.

When NRL counsel Patrick Knowles suggested he could have gone lower, and therefore avoided any contact with Crichton’s head, Finucane said, “that’s your opinion”.

Ghabar said “accidental head clashes” had happened in rugby league for more than 100 years, and it would be “entirely unfair and set a dangerous precedent” if players were now rubbed out for similar offences.

Knowles, however, quickly responded: “There’s no suggestion accidental head clashes are suddenly unacceptable. What we are saying is this action by Dale Finucane was careless and it could have been avoided had he been in control … he could have approached Crichton with less speed and more care.”

Crichton, who appeared to lower his body just before being flattened by Finucane, was heavily concussed on the night and had his ear repaired on Monday. He will not play for the premiers on Friday night against Parramatta.

After Saturday night’s game, Sharks coach Craig Fitzgibbon thought the contact between the NSW Origin representatives was an old-fashioned head clash, but Penrith counterpart Ivan Cleary said: “I’m sure the last thing Dale Finucane wanted to do was injure ‘Critta’ [Crichton]. Historically, head clash has been a head clash but I think for how easy it is to give a high-tackle penalty away now … it looked bad, didn’t it. And ‘Critta’, he’s not in a great way.”