Without a doubt the biggest story in world sport this week was football’s ill-fated European Super League proposal that never really got off the ground.

It got me thinking about whether something similar could occur in rugby. Given the best club teams in the world are split between hemispheres, from a logistical and geographical perspective, it is probably in the too hard basket for now. 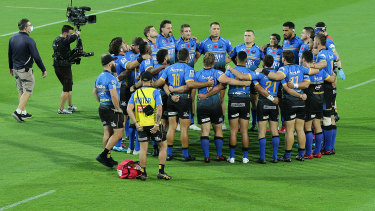 Better together: Force players form a huddle after their win over the Reds on Friday night.Credit:Getty

But, ultimately, there needs to be greater co-ordination among all competitions in the world and we need to have clearly defined periods for internationals. Owners of clubs aren’t compelled to let players go, outside of World Rugby’s “regulation nine”, so that’s why the governing body needs to take control.

World Rugby is being held to ransom by strong clubs and national unions.

As an example, the Six Nations should really be played at the same time as the Rugby Championship. They’re not going to come out with a perfect season, but the wheels need to start moving for greater alignment.

The pandemic has made Super Rugby shorter and I think that is good because it frees up the rest of the year. Other competitions should be doing the same.

However, football’s ill-fated European Super League proposal should act as a warning to rugby authorities about the implications of private equity ownership. Could a similar breakaway happen? Potentially.

Private equity investors – naturally and quite understandably – are only responsible to their investors and therefore only in rugby for financial gain. They are doing it to optimise their returns for a three to five year period and their exit strategy does not necessarily have to align with the longer term interests of the sport.

New Zealand Rugby is going through a process where US investment company Silver Lake wants a 15 per cent stake in the game. The exit strategy is the intriguing part. How long will they stay and what will they take when they go? The game needs to be very prudent about why we’re selling off equity.

Given the Rugby World Cup is the world’s third largest single sport event, I can only assume financial investors want a slice of that lucrative pie, too.

I hope New Zealand doesn’t just jump at something because there is €225 million ($350 million) on offer for a 15 per cent stake. Keep in mind, the voting rights and political clout that it brings in the NZR boardroom.

I’m not saying private equity is necessarily bad, but if you’ve got different groups owning different parts of rugby throughout the globe, it could be precarious and World Rugby needs to keep a close eye on it.

The game can’t afford to have too many groups involved, especially stakeholders with little interest in the game past its financial benefits.

On another note, it would be remiss of me not to say what an incredible performance the Western Force put together on Friday night to hand the Queensland Reds their first defeat of the season.

It was a result derived directly from heart, belief and no small measure of courage. To recover from an early Reds onslaught, then build intensity and energy throughout the rest of the match, was simply extraordinary.

And if anyone wanted a lesson in humility and authenticity, Reds coach Brad Thorn’s post-match interview on the ground in Perth was brilliant. He’s a classy individual.

Allegations against Sam Burgess ‘orchestrated’ by his ex-wife, court hears