Former All Blacks prop Carl Hayman says he has been diagnosed with early onset dementia at the age of 41.

Hayman told New Zealand media on Wednesday he likely also has chronic traumatic encephalopathy, widely known as CTE, a progressive brain condition believed to be caused by repeated blows to the head in contact sport. CTE can be diagnosed only in an autopsy.

The 45-Test All Black, who also played for Newcastle in England and Toulon in France before retiring from top-level rugby in 2015, said his condition led to alcohol abuse, suicidal thoughts and erratic behaviour.

In May 2019, he received a four-month suspended prison sentence in France for domestic violence.

“I spent several years thinking I was going crazy,” Hayman told New Zealand sports website The Bounce. “At one stage, that’s genuinely what I thought. It was the constant headaches and all these things going on that I couldn’t understand.”

Hayman said he was initially reluctant to undergo tests to determine whether he had suffered brain conditions related to playing rugby union. 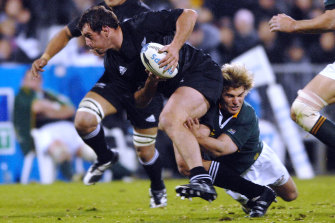 Carl Hayman taking on the Springboks in 2007. The former All Black has revealed he has been diagnosed with early onset dementia at the age of 41. Credit:AP

“I (deliberated) for about 12 months about whether I’d do anything about it and find out if something was wrong with me, or whether I would just get on with life and hope for the best,” he said.

Hayman said he consulted doctors in New Zealand before he went to Britain “but the process seemed like it was going to take a long time and I was getting to the point where I needed answers”.

He decided to go public about his health because, “it would be pretty selfish of me to not speak up and talk about my experience when I could help a guy in New Zealand perhaps who doesn’t understand what’s happening to him and has no support network to lean on.”

Hayman and another former All Blacks player, Geoff Old, have been in touch with British lawyers pursuing a legal case against World Rugby and the Rugby Football Union on behalf of players who have suffered early onset dementia as a result of rugby injuries.

Former England and British and Irish Lions hooker Steve Thompson and other retired players launched the action. Thompson recently said he had no memory of being part of England’s successful World Cup campaign in Australia in 2003 and often forgets his wife’s name.

Hayman said he hoped the action would result in greater awareness of the danger of head injuries and better treatment for players.

“These younger, aspiring players need to know what they’re getting into and there needs to be more support and monitoring around head injuries and workloads if they do decide to play professionally,” he said.

Players from other contact sports have launched legal action on similar grounds.

Ex-Wigan star Bobbie Goulding is part of a test group of 10 former rugby league professionals in England involved in the action against the Rugby Football League. Goulding has been diagnosed with early onset dementia and probable CTE.

In the US, the disorder has been found in former members of the military, American football players, boxers and others who have been subjected to repeated head trauma. A recent study found signs of the disease in 110 of 111 NFL players whose brains were inspected.

Several years ago, the NFL agreed to pay $US1 billion to retired players, who claimed it misled them about the dangers of playing football.