A junior Panthers footballer who stabbed an opposing player and two spectators with a 15-centimetre kitchen knife is set to serve his term of imprisonment in the community after a judge ruled a life ban from the NRL would have caused him a significant degree of emotional impact.

Ratu Nanovo, now 20, faced Parramatta District Court on Wednesday for sentencing over an August 2020 brawl that broke out in car park of North Parramatta’s Old Saleyards Reserve after a match between the Wentworthville Magpies and Penrith Brothers under-20s teams. 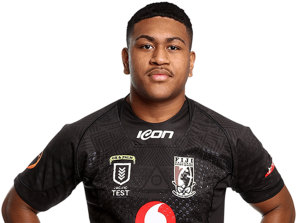 Ratu Nanovo was handed an aggregate prison sentence of three years in an effort to give the youngster the best chance of rehabilitation.

The court heard how the on-field conflict became an off-field crime when Nanovo, who was 19 at the time, alongside teammate Bradley Middlebrook approached Magpies player Sione Latu in the car park following the game. Mr Middlebrook had been sent off for a shoulder charge during the match.

Nanovo returned to his car and pulled out the kitchen knife, which he had in his possession, along with other cutlery, as he was helping a friend move homes.

Nanovo was punched in the face before he stabbed Mr Latu and his two cousins while Mr Middlebrook threw numerous punches, the court heard. Mr Latu suffered critical injuries to his neck and body. He recovered but was forced to undergo surgery.

On Wednesday, Judge Stephen Hanley SC handed Nanovo an aggregate prison sentence of three years in an effort to give the youngster the best chance of rehabilitation.

Judge Hanley ruled that Nanovo had taken the knife out of his car in order to protect himself and said he believed it was not a pre-meditated decision.

Nanovo was initially charged with three counts of wounding a person with intent to cause grievous bodily harm, but had the charges downgraded in July after doubt emerged over whether the teenager had intended to stab anyone.

Nanovo plead guilty to two counts of the lesser charge of reckless wounding in company.

Judge Hanley told the court how Nanovo was within the Panthers system at the time and had experienced the highs of representing Fiji at an international level.

“He would have had a reasonable expectation of being a successful rugby league professional football player and could have been appropriately rewarded financially with some recognition, maybe on an international or at least national stage of someone skill in that field,” Judge Hanley said.

Judge Hanley also told the court how the former Australian Schoolboy received a NSWRL lifetime ban from playing or attending any junior league match in the state as a result of the brawl.

“I accept that must have had a significant degree of emotional impact upon him in relation to what would have been,” he said.

Judge Hanley said that, despite the offences being serious in nature, Nanovo’s youth was a significant factor in his sentencing.

He said there was an added degree of harshness associated with handing down a custodial sentence amid the current COVID-19 situation due to strict protocols being employed within NSW prisons.

Nanovo will have until a December 8 final court date to be approved for home detention. If he fails to be approved he will serve his sentence in custody.