Josh Hannay’s first game as interim coach of the Cowboys ended in defeat as Manly secured a win which took them back into the top eight of the table.

The visitors made the most of a strong start when Curtis Sironen forced his way over after six minutes and they moved further in front through Danny Levi with 25 minutes gone. Kyle Feldt’s spectacular try got the North Queensland back into the match six minutes before the break though, with the winger converting his own score to make it 12-6 to the Sea Eagles at half time.

The inspirational Daly Cherry-Evans helped the Sea Eagles extend their advantage just before the hour though, forcing his way over despite Feldt’s best efforts to stop him.

Half-back partner Cade Cust, who impressed in place of the injured Dylan Edwards, went over in the 66th minute as well and Reuben Garrick made it four from four with conversion attempts. 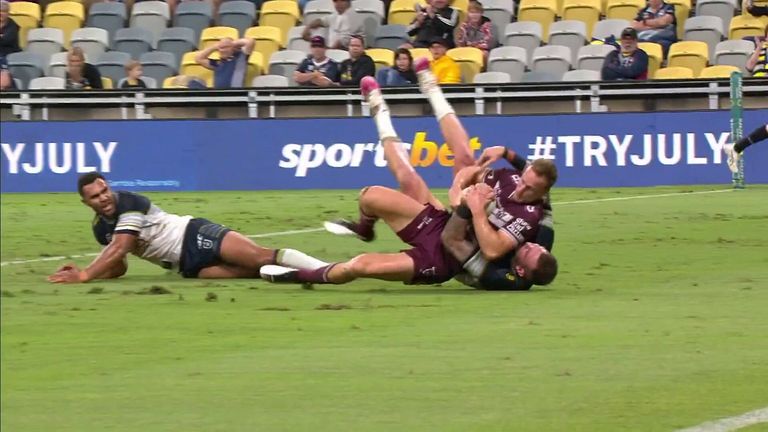 Melbourne could hardly have asked for a better start when Addo-Carr went over for his first in the opening minute, but English prospect Herbie Farnworth – who was previously denied by the video referee – helped get them back on level terms with 12 minutes gone. Kotoni Staggs kicked the conversion and then put his side ahead with a penalty, but Cameron Smith got the visitors back on level terms with a penalty of his own, followed by Hughes crossing to help them into a 12-8 lead at the break.

It was all Melbourne in the second half though and a devastating counter-attack, started by Addo-Carr scooping up a loose ball and streaking clear, led to Kenny Bromwich crashing over to increase the Storm’s lead.

That opened the floodgates and Faasuamaleaui went over for his first on 53 minutes, followed by Ryan Papenhuyzen getting on the scoresheet six minutes later.