Home » Rugby » From ‘boring’ to dynamite: Demons found the fun in second-half demolition

Melbourne midfielder Christian Petracca, supreme in his side’s come-from-behind demolition of the Brisbane Lions on Friday night, said his side played “boring” football in the first half.

“We weren’t playing with excitement, having fun like we usually do,” he said. It was a blunt assessment. But it only made what his side produced in the second half more scintillating. 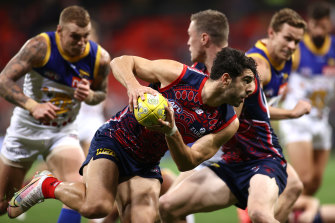 Christian Petracca thought the Demons’ first half against the Lions was “boring” football.Credit:Getty Images

The Demons’ hardness has long been queried, but their resilience and fitness is becoming a feature. “We’ve got them in really good shape,” Goodwin said. “There is no doubt our ability to run games out has been a hallmark of our year so far and that is the ability to do it week after week, and in games where we’ve been in trouble.“

Kysaiah Pickett was instrumental in Melbourne’s recovery with another electrifying performance from a Cyril Rioli-like nine touches. Like Rioli, it was what he did when he didn’t have the ball that almost mattered as much as his three goals. “When Kozzie gets near the ball, you can hear the crowd get involved in the game,” Goodwin said.

“He brings out energy in our team. Even during the week at training, and in games, he applies pressure, he gives you spark. And his ability to finish and impact the game is sensational.″⁣

Brisbane Lions coach Chris Fagan said Melbourne was the best his team had faced so far this season. “Look, you would have to say so,” he said.

“They have taken all before them. To be 11 wins and one loss after 12 games is a phenomenal effort [and] their loss was by the smallest of margins. So you have to take your hat off to them.”

Fagan said his team had “worked [their] backsides off, and probably should have had a bigger lead at half-time, but didn’t. And Melbourne, they are on top of the ladder and a great team and responded very well in the second half.

The Lions now have the bye, and after seven wins in a row, Fagan admitted perhaps his team was riding for a fall. “To be honest with you, I thought our guys, for some reason after half-time, we lost our energy.

“And no matter what we tried, it didn’t seem to work. So maybe the break has come for us at a good time.”