Home » Rugby » From the Archives, 1972: Blues and Tigers tie in semi-final thriller

FROM INSIDE THE FENCE

Now we have to slug it out again

Well, we’ve got to go through it all again. I’m quite sure a draw doesn’t do either of us any good.

It gives St Kilda a week’s rest and we’ve got to slug it out again. And that’s the sort of game it will be judging on this one. 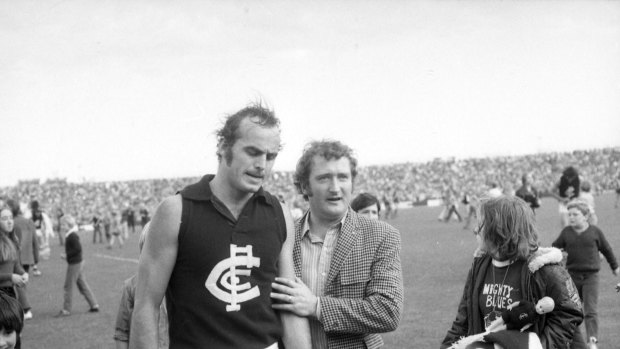 Alex Jesaulenko leaves the ground after the draw between Carlton and RichmondCredit:The Age Archives

I feel that we were lucky to get out of the game with a draw. Any side a goal in front at the 29-minute mark must be considered unlucky.

It was a very tight game… a game of defences. I felt that we had the edge in the first half and Richmond in the second half.

Some people are saying that it was a lousy game to watch and there wasn’t much good football.

It’s worth mentioning that the wind was gusty, and made kicking and judgment difficult.

This is an added reason why both defences played so well. Look at our side. Most of our good players came from the back line – Phil Pinnell, Geoff Southby, John O’Connell, Vin Waite.

You know we play so little at VFL Park that the ground still tricks us… and I mean both sides. You just don’t know exactly where the scoring avenues are.

Oh, and on this hoodoo business. We don’t believe Richmond has anything on us. They’ve been the better side on the day a couple of times. That’s all.

One of the reasons for us not winning was that we fell down in attack. Many of our moves looked promising but their tight defence held us out.

On the other hand, Richmond had Royce Hart. He was really damaging in the second half. It took him a long time to adjust his game to the conditions.

I think it is fair to say that the players on both sides would have much preferred a result to the draw.

That last kick of mine? I couldn’t hope to score against the wind and 70 yards out. It finished about 40 yards short!

FROM INSIDE THE FENCE

I could have cried…

Lucky, lucky, lucky Richmond… so lucky to get away with a draw after playing only one and a half quarters of football.

It all goes to show there’s a lot of truth in the old saying – “It takes 100 minutes of football to win a game.”

Don’t think Tom Hafey wasted any time in pointing that out to us after our lucky escape. He dragged us all into the coach’s room at VFL Park straight after our showers.

Most of us didn’t even have a chance to get our pants on. You might be able to get away with it once but not a second time – and you won’t catch us trying it at the MCG on Saturday. 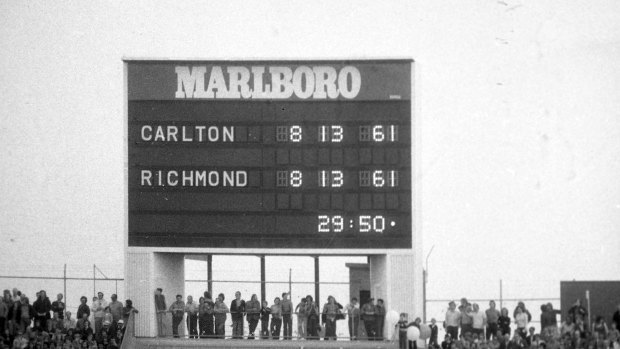 The scoreboard shows the match ended in a drawCredit:The Age Archives

Mind you, it wasn’t only Richmond that was lucky to get away with a draw. Carlton was all over us, in the first half, anyway, and should never have allowed us to get back into the game.

I can tell you one thing – a goalless scoreboard isn’t a pretty sight from a back pocket. I was getting pretty desperate there at one stage and it was a relief to see that first goal on, in the second quarter.

Despite our bad start – imagine it, six behinds in a row for your first scores – we were never really out of striking distance.

When we finally hit the front, I thought we had it won. Then Bruce Armstrong had to go and score that last goal. I could have cried.

The whole trouble of course, was that we allowed Carlton to dictate for most of the early game. Instead of playing our own distinctive brand of football, we were caught playing it their way.

It turned out to be a battle of the defences. I thought Carlton’s centre line of David Dickson, Alex Jesaulenko, and Andrew Lukas were on top most of the day.

I must mention Paul Sproule. When he replaced Ian Stewart (torn hamstring) after half time, it looked for a moment as if Jezza was going to run riot. But I reckon Sproule shut him out of the game.

Any advantage Carlton may have gained from the winning centre line was cancelled out on the ball.

How about young Marty McMillan? Three goals, after coming on as 19th man at half time, isn’t a bad effort at the best of times. But he did it after coming on when we were down, and almost out.

I am, we all are, very proud of that kid – he’s a player of the future, make no mistake about that. The way he showed up some of our more experienced players shows he has the right temperament.

Then Carlton and the Saints can wear themselves out trying to see who’s going to have a shot at us. We are a better side than we were last year – and we’ll prove it by winning that flag.

In the second semi-final replay the following week, Richmond defeated Carlton (110 v 69) The two teams later played in the Grand Final and Carlton was the winner.

Is Wales vs Scotland on TV today? Kick-off time, channel and how to watch Six Nations fixture

‘I don’t want to do it’: Bennett rules himself out of running for Maroons job