First published in The Age on September 8, 1991

The final-six system deserves a chance 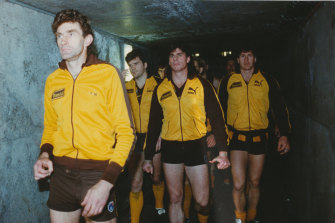 Poor Ken McIntyre. He conceives the AFL’s final four system and lives (uneasily) with the fact that it becomes universally acknowledged as the Page system, named after Percy Page, the Richmond delegate who moved its introduction at the VFL board table in 1930.

Sixty years on, he is asked to produce a final six system (with restrictions), and is left to carry the inevitable can. 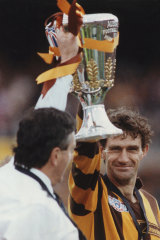 The new system isn’t perfect, but it seems people are much keener on pointing out possible weaknesses than they are at offering credible alternatives.

The team that loses today’s second elimination final at VFL Park will cry “foul”, and with a degree of justification, but the McIntyre system is the best available, given the directive from the AFL to him to produce a four-week play-off series.

He was told to arrange seven finals over four weeks, with not more than three on any one weekend, and with a reduced “advantage” for the top team, which dominated under McIntyre’s final five system (1972-90).

‘Age’ columnist Peter McFarline, in his enthusiasm for yet another assault on the AFL this week, neglected one or two rather material questions.

But, which of the winners would go into the second semi-final next weekend, collecting the double chance in the process? What if sixth beat third and fourth beat fifth? Can you imagine St Kilda’s Ken Sheldon saying “no complaints” when he learns Essendon has jumped from sixth to the second semi, while St Kilda plays another elimination final, and then another, and then another.

And, would there have been such a call for third to play sixth had Collingwood finished sixth? After all, the Cats would have faced up to the reigning premier, which had just won 10 of 11 games.

The outcry over the inevitable elimination of either Geelong or St Kilda is based on the romance of losing the exciting Cats, who haven’t won a premiership since 1913, or the equally exciting Saints, playing in their first finals series since 1973.

But, the fact remains that they are playing for the prize of a place in the second semi and the double chance. And, why does third deserve a reward of greater value, anyway?

The cries won’t spark much sympathy at Windy Hill. The Bombers won 11 games (Geelong’s number this year) in 1981 and 1982, finished fourth both years and lost in the elimination final both years.

In ’81, they finished one win behind top team and eventual premier Carlton. Of course, it’s sad that Geelong or St Kilda will miss, but what if a couple of sentimental favourites such as Footscray and Fitzroy had run fifth and sixth?

I like the idea of a final six. In ideal circumstances, it would take seven weeks to play. Mercifully, the mood favours a contraction of the season rather than a further extension.

The major beneficiary of the new playing conditions this year is West Coast, which gets a double chance and the right to play today’s qualifying final (against Hawthorn) in Perth. Rightly so. The Eagles won 19 of 22 games, finishing three wins clear of the pack.

The system isn’t necessarily at fault simply because the bottom two teams in the six are seen to be no better than mediocre. There are noises suggesting the AFL will overhaul the system for next year. It deserves a better chance.