Home » Rugby » From the Archives, 1993: The first AFL final played under lights a thriller

First published in The Sunday Age on September 5, 1993

FOOTBALL followers last night gave a strong vote of support for night finals – after setting a record-low attendance for the game played at Waverley during the afternoon.

More than 79,000 fans crammed the MCG to watch Carlton secure a place in the second semi-final by defeating Essendon by two points in a thrilling qualifying final, the first final to be played under lights since the competition began in 1897. 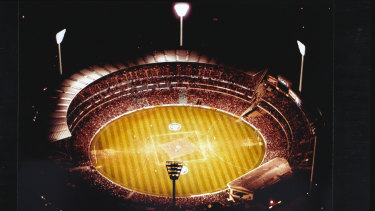 Floodlights illuminate the MCG as more than 79,000 spectators take their seats for the first ever night final. Credit:Craig Sillitoe

Carlton will now meet the winner of today's elimination final between Hawthorn and Adelaide.

Essendon will play West Coast in the knockout first semi-final after the Eagles defeated North Melbourne by 51 points before a crowd of only 29,147 in the elimination final at Waverley Park.

The figure for the day game was the smallest to watch a finals game since the war years, when finals were played at Princes Park and the Junction Oval. It was the smallest peacetime crowd at a final since 1931.

By contrast, the impressive night crowd fell short of the record in a night match of 88,066 set in a 1992 round-19 match between Essendon and Collingwood. The highest qualifying final attendance was in 1972, when 91,100 saw Collingwood play Richmond.

Superintendant Rod Lambert, officer in charge of A district, which includes the MCG and central city area, said just before the match started that the crowd was remarkably well behaved.

"We haven't had to lock anybody up and so far have only chucked two out," he said.

"One of those was a young bloke caught pouring whisky into his coke in the first quarter of the reserves match. 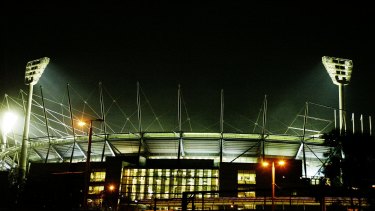 The MCG at night under lights.Credit:Paul Rovere

He said more than 180 police, including uniformed and plainclothed officers were patrolling the MCG. Regular Saturday night patrols outside the ground were also concentrating on the football crowd.

"So far they've been very good. Our real worry is after the game when it's dark and people are in the car park and heading for the station.

He said he hoped to place a uniformed officer every 30 metres along the approaches to Jolimont and Richmond stations.

"We want to make people feel comfortable about being able to get home safely.

The poor crowd at Waverley was surprising given the ideal weather.

Fans expecting a long, slow journey to the ground on the eastern road arteries were surprised to find themselves at the ground in 20 minutes.

North Melbourne fan Simon White said he drove from North Melbourne along Dandenong Road. "It took me 28 minutes. I left at 12.30pm, expecting at least an hour's drive and I couldn't believe it when I pulled into the car park," he said.

Parking attendants found they had so much time on their hands, a group launched into an impromptu game of handball using a tennis ball.

Oblivious to the official attendance, Mr Keith Mills, who has been a gate attendant at Waverley for 22 years, said it was one of the most disappointing crowds he had ever seen at a football final.

"I`ve been on the gate here since the ground was built and I've been following football for more than 50 years. This is the smallest crowd I have ever seen at any final," he said.

A group of traffic police found themselves with so little to do they took a seat in the stand and enjoyed the game.

"I'm supposed to be out looking after the traffic but there isn't any," said one of the officers. "It's terrible for footy.

Senior police said the small crowd was very well behaved with only a few minor incidents and no arrests.

The director of Advent Security, Mr Peter Benney, said the AFL had hired 30 staff for the clash because it had expected a small crowd.

"It was a ratio of about 100-1, which is unusual even for a home-and-away away match. It was a pretty quiet day for the boys. The crowd wasn't very large and North Melbourne are a pretty quiet mob anyway," he said.

Bar staff around the ground were astounded by the lack of numbers.

"It's ridiculous. It doesn't feel like a final at all. I feel like a fifth wheel, there's hardly anything to do," said an attendant in the members' stand.

Waverley's catering manager, Mr Frank Denapoli, said he had expected a small crowd and only rostered 200 staff to work at the ground.

But the St John Ambulance Corps wasn't taking any precautions and rostered 112 staff. The ambulance service reported very few problems expect for a drunken man who had suffered sunburn after falling asleep on the eastern side of the ground.

The 80-member West Coast cheer squad also had few problems despite handing out a 51-point defeat to North Melbourne and ending their finals chances.

The size of the crowd was of no concern to the triumphant Eagles supporters including bankrupt businessman Alan Bond, who was sitting with West Coast officials in a private function room. Mr Bond made his allegiances clear, wearing blue and gold socks and an Eagles scarf.

By contrast, a similar-sized crowd was at the MCG by the second half of the VSFL match. Crowds had been making their way into the ground since 2pm. Others were charging themselves for the clash at nearby hotels.

The MCG Hotel in Wellington Parade was obviously prepared for a crush and barricades had been erected across the first lane of the road to protect the expected drinkers.

Black Lives Matter: Martin Offiah explains how he fought back against racist abuse