It was a murdering-an-eight-goal-lead-in-the-final-quarter type of game. 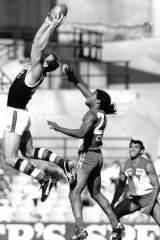 Swans Sanford Wheeler and Jamie Lawson can only watch on at the ball is marked by a Saints player.Credit:Craig Golding

Yes, Sydney, a team that had won only two AFL games in two years, took a carefully constructed 48-point advantage, allowed it to fall to pieces around them and then waited for a nonplussed St Kilda to wallow through the wreckage to an unbelievable one-point win.

To put such a performance in perspective, it was akin to gift-wrapping and hand-delivering a victory to a team that, as St Kilda coach Stan Alves said later, was “getting walloped”.

Given the litany of disasters that have befallen the Swans over the past couple of seasons, there will be some who suggest that surely a single loss couldn’t be that bad.

After all, no one died.

Correction, all those associated with the Sydney club died a thousand deaths as the final siren sounded at the SCG yesterday.

Alves thought he could see the signs of a St Kilda revival late in the third quarter, when his side kicked four goals to reduce a 51-point deficit to 38.

Only the St Kilda faithful, however, could have dreamed of the Sydney slump that led to such an improbable win.

Sydney was the better team by the length of the SCG until its ball disposal, particularly out of defence, began to go awry. 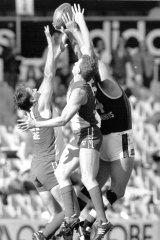 Sydney take on St Kilda at the SCG.Credit:Craig Golding

And a ploy by Sydney coach Ron Barassi to put an extra man (Derek Kickett) in defence to help keep Tony Lockett quiet backfired conclusively when the star full-forward single-handedly led his side to victory with four goals in the final quarter to increase his tally to 11.

The feisty Lockett booted his final six-pointer with less than a minute on the clock, increasing the agony for the Swans fans who had watched St Kilda bag seven goals in 12 minutes.

It was nothing less than wrist-slitting material for the Swans, and only time will tell how far this latest disaster sets them back.

Barassi summed it up with one word: “Diabolical.”

“The players were very shattered. It will be a test of their resilience.”

Barassi couldn’t help but rue the absence of Dermott Brereton, who has missed the Swans’ first six matches through suspension.

“We’ve been in the ball-park every game except one, and some of them could have been a different story if Brereton had played.”

Alves, in contrast to Barassi, was grinning in the visitors’ dressing rooms. He conceded that St Kilda had had “a very lucky escape”.

“I told the players at three-quarter-time that I was really concerned because I felt I was the only bloke down there who thought they could win,” Alves said.

“And looking at their eyes, I didn’t think they did.”

As usual it was Lockett who responded and drove his side home, muscling aside Sydney full-back Mark Hepburn and Kickett to mark and goal in the last minute of the match.

Although he was St Kilda’s only stand-out player in the first three quarters, he received strong support In the last term from Nathan Burke and captain Danny Frawley.