Home » Rugby » From the Archives, 2012: Swans have the Goodes in GF win over Hawks

HAS there been a better grand final? Arguably not. Has there been a gutsier win than Sydney’s 10-point triumph over a warm favourite? While it’s easy to bask in hyperbole in the afterglow of an absolute epic, it’s hard to think of one. 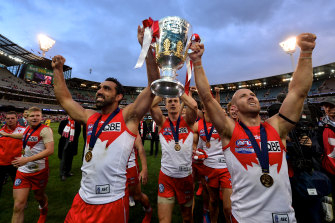 Football drama, certainly, doesn’t get any better than this. A belter of a game, which twisted this way then that, and was signed off with a nail-biting classic, the result in doubt until the moment Nick Malceski’s hurried, high snap floated over the goal line to sink the final dagger into Hawthorn’s heart with just 34 seconds left on the clock.

Hawthorn will be shattered. Its best this year was beautiful to watch, powerful and skilful. But the Hawks weren’t allowed to be quite at their best when it mattered most, against an opponent that wanted the rewards just as much, and simply found a little bit more come crunch time.

That was Hawthorn’s role in the drama when it famously won the 2008 premiership against a side that had lost one game for the season. Yesterday, it was the Hawks’ turn to be on the receiving end of the upset. 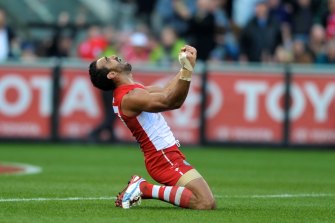 Adam Goodes at the end of the 2012 grand final.Credit:Wayne Taylor

In retrospect, though, not a huge upset. Sydney spent most of the year battling for acknowledgment despite consistent results. But its spirit is huge and there’ll never be a better example than yesterday’s triumph.

This was a victory won against all sorts of odds. The Swans had won just one of 15 previous outings on the MCG, Hawthorn’s home ground. They had a score of players out on their feet at the end: co-captain Adam Goodes, hobbled by a knee injury early, just one; Jarrad McVeigh, superb all day, and defender Ted Richards two more.

They were smashed for inside 50 entries, contested possession and clearances, won just 10 free kicks for the game to Hawthorn’s 21 and had 21 scoring shots to 26. Yet still they emerged with a famous premiership win. 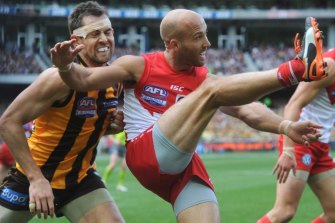 Action from the 2012 AFL Grand Final between Hawthorn and Sydney.Credit:Sebastian Costanzo

Sydney looked under the weather several times. Early, when jumped with four goals to just one. Again in the third term, when Hawthorn finally exploded into life with five goals in 10 minutes, a compelling response to their own run of eight unanswered goals. And once more early in the last, when the Hawks launched attack after attack, kicked the first two goals of the term to take an 11-point lead and had a chance through Lance Franklin to make it 17. But John Longmire’s side just finds a way to win.

The Swans could have been spooked by Hawthorn’s start. Only a few misses kept the scoreline relatively close as Franklin became an unlikely possession leader for his team and Sam Mitchell won plenty of ball and clearances. Then the Hawks found the target as well. Buddy converted from 50, Hawthorn now starting to get bang for its buck and enjoying a whopping 14-5 edge on the inside 50 count.

Two more telling blows were landed within a minute just on quarter-time. Hawthorn’s pressure was telling, the Swans banging the ball in hurriedly and inevitably watching it rebound with more impact. A classic example was Nick Smith’s clumsy kick into the Swans’ scoring zone, back it came with interest, Paul Puopolo’s hoick off the ground ending with Luke Breust, via Clinton Young, and another goal. 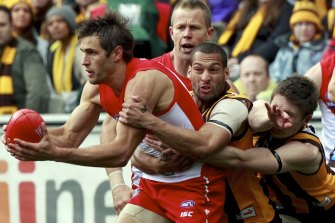 Josh Kennedy was a key to the Swans’ 2012 grand final triumph.Credit:Paul Rovere

From the restart, another Mitchell clearance found Jack Gunston, the gap moved to 19 points, and only half-a-second prevented it being 25, Liam Shiels “goal” a fraction too late.

But if there were already queries about Sydney’s capacity to withstand the storm, they were about to be answered in spectacular fashion — and quickly. Josh Kennedy lit the spark within a minute. There was some Hawthorn disquiet about the next reply, Lewis Roberts-Thomson nailed in a tackle by Young, which went unrewarded, a quick kick from Adam Goodes landing in Kieren Jack’s lap.

You could see the scoreboard shift, but feel the momentum shifting as well. The Swans were winning the outside and the inside battle now, Goodes ever-present, Lewis Jetta providing plenty of run. Sam Reid, fumbly early, straightened up when it mattered, the last link in a beautiful chain of possession between Alex Johnson out of defence, Malceski and Hannebery, Reid’s cool conversion on the run putting the Swans in front for the first time. From there came the obligatory critical grand final cameo. 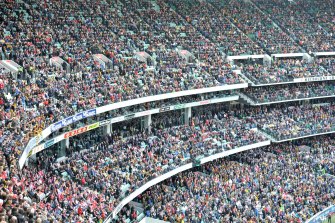 Mitch Morton was considered a borderline selection for this game, but didn’t take long to show why he found his way in with the last pair of goals before half-time. The first came after more hard work from Goodes, ferreting the ball from the bottom of a pack and feeding out a handball to the former Tiger, who almost in slow motion turned on to his right and curled a snap just over the goal line.

Three minutes later, the same combination was at work again, this time a Goodes soccer found Morton in a little more space, space he duly made use of, selling a baulk and snapping a second.

It was six goals to zip, a 16-point lead, the Hawks a little stunned — with a heap of work to do to salvage the game — and with a heap of talent required. Should it surprise that both qualities again came to the fore? 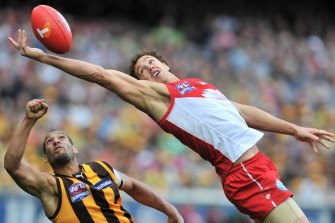 Shane Mumford and Josh Gibson compete for the ball.Credit:Joe Armao

Sydney had the margin out to 28 points when the giant stirred again. A free kick and goal to David Hale started the ball rolling. Franklin would impose himself on the contest again with two more booming goals from outside 50. Gunston converted a chip from Paul Puopolo. Then Smith, taking his cue from Buddy, launched another long bomb after another Mitchell centre-square clearance win. It was some burst. Five goals in 10 minutes, the vocal brown-and-gold hordes screaming encouragement. Suddenly, the Hawks were back in front.

It would take something special to thwart the favourite from here, despite McVeigh’s steadier a couple of minutes before three-quarter-time.

That was even more so a tick over two minutes into the final term, by which time Hawthorn had added a couple more, from Breust, who sprinted into the open goal to capitalise on the fruits of a huge Franklin tackle, then big man Hale, who was fed from a handball by Mitchell.

But the Swans responded, they found something. Midfield stars Ryan O’Keefe, who’d tackled like a man possessed all day, and the far-older-than-his-years Hannebery, courageous and prolific, found another gear. It was Hannebery whose goal on the run gave his side hope. Jack who levelled the scores after Morton had won a critical one-on-two contest against Hawk defenders Ryan Schoenmakers and Josh Gibson, and Young had taken an untimely slip in the defensive goal square.

Goodes, sore and hobbling, held his ground enough to bounce one through as the Swans wrenched back the upper hand. Fate began to desert the Hawks, Gunston hit the post to reduce the gap to an even goal, thoughts momentarily wandering to the prospect of a second grand final tie in three years. Brad Sewell, heroic for virtually every minute of this epic for the Hawks, had two speculative, difficult snaps. Both missed. Jetta, tiring, couldn’t make the distance from just on 50 metres.

One final goal-front scrimmage. One last stoppage. Enter Malceski. Six years ago, he’d kicked the final goal of a grand final, one that left the Swans one agonising point short of West Coast. This one, which got them over the line, is already destined to be one of the most famous snaps in football history, in one of the very best flag-deciders we’ve been fortunate to witness.

If there is one time to make your mark in the AFL, it’s on the grandest day of the AFL calendar. Dan Hannebery did just that yesterday, in terms of his statistical impact and courage. The latter was shown in the first term when he had to scramble back for a mark and was crunched by David Hale. It reflected what his teammates later said was the Bloods’ code.

Paul Roos, the architect of the Swans’ 2005 premiership, said yesterday’s success was not only good for the AFL, but also for Sydney’s fledgling neighbour, Greater Western Sydney. “The Giants were always going to struggle . . . the fact the Swans have won the premiership takes a little bit of pressure off the Giants and allows them to build a bit of momentum slowly, like everyone thought they would,” he said.

THE RACE IS ON

Lewis Jetta had tears of relief and delight after the game. He had achieved the ultimate success, and provided one of the highlights when he outran fellow speedster Cyril Rioli late in the first term. “When I got the handpass off Heath Grundy I took a little glimpse and I knew it was him [Rioli],” he said. “Pace is my strength and I backed my speed. I got away. We’ll probably joke around and have a good laugh about it in the future.” Jetta still had tears welling after he was congratulated by his parents: “I couldn’t hold it in as soon as I saw mum and dad.”

‘We’ll show them’: Kennedy bristles at September snub for Swans