The AFL is considering a proposal for two AFLW seasons to be played in the same calendar year amid a push from clubs for the governing body to provide more clear air for its national women’s league.

The future of AFLW will be on the agenda when the league’s competition committee meets on Tuesday. 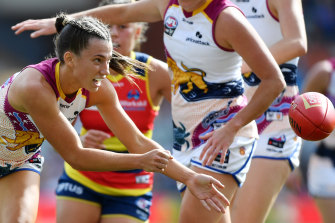 The four AFL clubs yet to be admitted into the women’s competition – Sydney, Hawthorn, Essendon and Port Adelaide – are all pushing to enter the league, with the Hawks and Bombers adamant they should be allowed to field a side next season.

While the AFL is yet to make a determination, the pathway for AFLW expansion and the season structure is set to be decided by the AFL Commission at a meeting next week.

Well-placed sources confirmed on Monday that among the possibilities on the table is for the 2022 season to be played in a similar January-April window as 2021, while retaining the status quo of a 14-team competition.

Under the proposal, the next season would begin in December 2022 and be the first to feature all 18 clubs.

The rationale behind shifting the start of the season to earlier in the summer is two-fold. Firstly, it would allow the women’s league to play more of its season without having to compete for media attention against men’s football; both the men’s pre-season and premiership season.

There is also the matter of staff crossover between clubs’ men’s and women’s football departments. Given the significant cuts to the AFL football department soft cap, clubs have become increasingly stretched and were challenged by the major overlap of the men’s and women’s seasons, the latter of which ended this year with an April 17 grand final during round five of the men’s league.

Collingwood men’s defender Jordan Roughead moonlights as an assistant coach of the Pies’ women’s team and had to miss attending one of the Magpies’ AFLW finals because of a men’s game.

Expanding ahead of the 2022/2023 summer season would have several benefits including aligning with a new collective bargaining agreement, given the league’s current deal with the AFL Players’ Association is due to expire next year.

It would limit the chaos of announcing the addition of new clubs several weeks after the conclusion of the 2021 season. While the AFL is yet to announce details of this year’s sign and trade period, clubs, players and agents are already in advanced negotiations about player moves for next season, which would be railroaded should the AFL choose to expand for 2022.

Sources indicated there were several other options being looked at for expansion and season structure.

Hawthorn president Jeff Kennett last month wrote to members, stressing that the Hawks deserved to be given the green light for an AFLW side next season.

“I cannot believe that we will not get approval to enter the competition. It is just so wrong that we are excluded. Unfair on our women players and members,” Kennett wrote.

“Be assured if we do not get the green light, it will be discrimination of the worst kind when we are the only women’s team where all our coaches of the women’s team are women, led by the fabulous [coach] Bec Goddard.”

All Blacks’ plans for NRL code-hopper

Tigers pounce on Blues without making a sound