Fremantle hope the hamstring injury to dual Brownlow medallist Nat Fyfe is just a minor setback as the Tigers rued letting another opportunity slip to cement a top-eight spot when Noah Cumberland played on after marking within scoring range unaware the siren had gone as he marked the ball inside 50.

Tigers’ coach Damien Hardwick refused to blame the decisions made in the final seconds for the loss saying the fourth gamer deserved credit for wanting the ball with the game up for grabs. 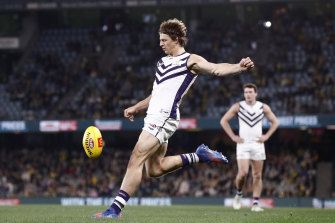 Nat Fyfe of the Dockers kicks for goal during the round 19 AFL match between the Richmond Tigers and the Fremantle Dockers.Credit:Getty

“Noah [Cumberland] gave himself a chance to win the game … the clock expired but he put himself in the right position,” Hardwick said. “Like last week, we learn from it.”

Hardwick spoke to Cumberland after the game to help him put into context what had happened.

“He is disappointed like any kid would be, it’s part of the whole equation,” Hardwick said.

However, there was no hiding the Richmond coach’s frustration at the way the finish panned out with Noah Balta also being called to play on before he had a chance to put the Tigers ahead when the shot clock expired as he was preparing to take the vital kick.

“We had ample opportunity there,” Hardwick said. “Two shots effectively to try to win the game and got zero points for it.”

Richmond has now blown winning chances in their past three matches which puts them at risk of falling out of the eight but the club was not blaming the pair of Noahs.

Longmuir praised Lachie Schultz for keeping the umpires’ alert to the shot clock when Balta was preparing to kick and Michael Frederick for making the smother that in the coach’s words “saved the game”.

“I thought our players remained on task and in the moment,” Longmuir said.

The Dockers’ coach was calm about Fyfe’s injury that occurred just after half-time in his sixth game back from a series of shoulder and back problems.

“It’s just a road bump, that’s the way I see this,” Longmuir said.

“We have got over his big injuries and sometimes when you’re trying to come back and trying to be really committed you can have little setbacks and that’s what this is, just hopefully a little setback.”

The Tigers expect Tom Lynch to return from a hamstring problem but Dustin Martin’s setback has him weeks away from a return. Hardwick said he was flattened when Martin had his setback and the team missed him.

“He is a wonderful Richmond person that our club thrives off as do our players, so it is a significant loss, and it is upsetting when a guy has had some challenges this year, but we want him to get back and get back quick,” Hardwick said.

The Tigers have just one win and a draw in the past five games having lost three by less than a goal and could be out of the eight at the end of the round. However, Hardwick said the players know they are good enough to compete in finals if they qualify.

“If we get it right at the right times [and] get our personnel back, we can go well. They know that, the players, they can feel it. It might not be showing on the scoreboard, but they have got a general feeling about how we are playing and how we are operating.”

Never been reliant on one person this year.