Home » Getting more out of Moore going forward

But when a key position player as good as Moore stands in defence while the team battles to win a contest forward, let alone score, the thought becomes impossible to resist. 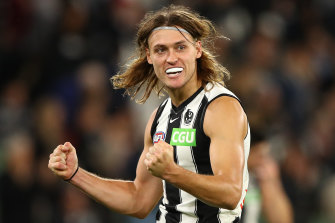 More evidence will be gathered on Sunday when Collingwood play Essendon.

“It’s probably is a bit harder than what I thought it might be initially,” Taylor said.

Buckley will be under no illusion as to how difficult it is to create forwards out of defenders. Since he began coaching he’s tried Tyson Goldsack, Ben Reid and Brody Mihocek, who was drafted as a defender, up forward, with only Mihocek a resounding success.

“These days there are watertight structural components forward of footy that they have to work in with five other boys. It’s not just a free hit to play your own way … it’s a unique player and style of person as well who can adapt to that.” 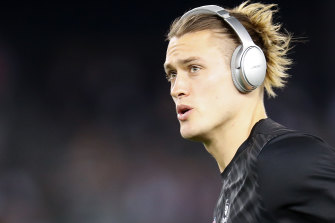 One former player with experience both ends of the ground says he is yet to see Moore’s forward craft.

The question in his mind is whether Moore is a forward who went back and is now going forward again or whether he is a back who is being thrown forward.

He suspects Moore to be a natural back who should stay put although those close to Moore argue differently.

Taylor knows that unless you have a forward’s traits a limit can be reached playing forward that doesn’t exist behind the ball.

“A lot of people just think he is a great mark as a defender, he’s quick and he reads the ball well and he can just transfer those skills to being a forward but at the AFL level where everything is so elite it’s not quite as transferable,” Taylor said.

In simple terms, everyone is trying to stop a forward when they are going for a mark, from the moment they make their first move to when they fly for the ball. The same usually doesn’t apply to defenders who are ignored until they come up holding the ball.

Taylor said he found marking in defence, which required him to run back with the ball or run patterns that allowed him to hook into marking contests, much easier than running hard at the football on the lead as a forward.

“You have to do a lot of work earlier to actually influence the contest,” Taylor said.

This season, Melbourne’s Tom McDonald and Essendon’s Cale Hooker have returned forward through necessity and are faring well, but not before most considered that the prospect of them playing there again had passed.

Moore, who won his first All-Australian jumper last season as a defender, is seen as a better defender than either of those two were but Buckley’s hand has, to some extent, been forced.

“There is more to it than just competing. Can they impact the game? Have they got the conditioning to repeatedly deal with the best backs in the game? It’s not as easy as people think.“

Moore, for his part, only asked Buckley that he not be considered the white knight capable of solving the team’s problems forward when told of the move. Buckley understands that sentiment, given he played virtually every position in his illustrious career when the team was struggling.

He knows there are very few Dave Grohls in football, multi-talented people able to switch from playing drums with Nirvana to being the Foo Fighters’ frontman with a guitar in hand.

Most are hoping Moore is that rare beast but Buckley’s expectations are more modest.

“We weren’t providing a consistent enough contest or options to the ball carrier so we wanted to change that up and a key part of that has been Darcy going forward and we need to explore that more,” Buckley said.

On Sunday, the MCG becomes Moore’s stage, a performance within a match that could determine Collingwood’s immediate future and a young gun’s football life.

Back and forward – success stories

Back and forward – hit and miss

Keep up to date with the best AFL coverage in the country. Sign up to receive our newsletter twice-weekly during footy season.