Three goals each from Rebecca Privitelli and Cora Staunton have helped GWS keep their faint AFLW finals hopes alive with an upset 20-point victory over St Kilda at a rain-soaked Moorabbin on Saturday.

The Giants set up the dominant 7.3 (45) to 3.7 (25) victory by kicking the first four goals of the game and, outside of a strong second quarter from the Saints, the visitors were hardly troubled. 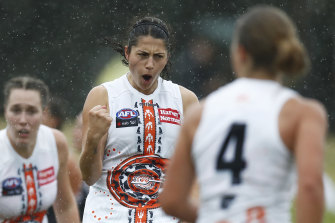 Rebecca Privitelli booted three goals for the Giants in their win over St Kilda on Saturday.Credit:Getty Images

The result improved the Giants’ win-loss record to 3-4, meaning they might only be one game, and a considerable amount of percentage, outside the top six with two home-and-away rounds to play.

For the Saints, however, whatever small hopes they had of playing finals have now been extinguished.

Compounding things for St Kilda was one of their main inside ball winners, Rosie Dillon, taking no part in the second half after sustaining an apparent throat injury. 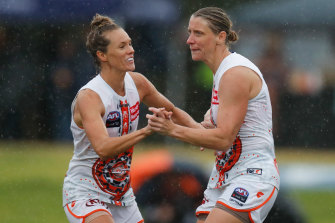 Cora Staunton (right) and Eleanor Bennetts of the Giants celebrate on Saturday.Credit:Getty Images

Georgia Patrikios was far and away St Kilda’s best with 27 disposals and six clearances, combining with Tyanna Smith, Cat Phillips and Alice Burke to lay 45 tackles.

The Saints actually finished with more inside 50s (25-23) and convincingly out-tackled GWS (103-45), but the visitors were a lot more efficient in the wet and windy conditions, which lent themselves to a hard, contested brand of footy. 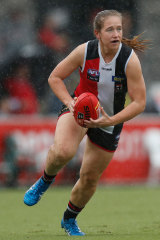 St Kilda’s Rosie Dillon took no part in the second half after sustaining an apparent throat injury.Credit:Getty Images

The Giants, led brilliantly by Privitelli, adapted quicker and overwhelmed the hosts in the first quarter.

After being bossed around in the contested possessions in the opening term (35-20), St Kilda hit back hard in the second, keeping GWS scoreless while helping themselves to eight scoring shots (2.6), with the ball hardly leaving their forward half.

The Saints’ inaccuracy stopped them from taking the lead, though, and the Giants made them pay in the third period, preventing them from entering their forward 50 as veteran Staunton and Privitelli booted their second and third majors respectively to extend the margin to an insurmountable 20 points at three-quarter-time.

Scintillating Staunton
The 39-year-old Irishwoman sealed the victory with a spectacular piece of play early in the final quarter. After the ball cleared her and direct opponent Rhiannon Watt at the top of the Giants’ 50m arc, the pair embarked on a foot race. With Watt hot on her tail, Staunton executed two toe-pokes to get the ball deep into attack and, while still under enormous pressure, her third soccer off the ground from a tricky angle in the pocket dribbled through the big sticks for her third goal.

Privitelli’s not-so-subtle reminder
After being dropped last week, Privitelli made a huge statement to coach Alan McConnell by starting the game with a bang, taking two huge contested marks in the goal square and converting both opportunities to set up a big quarter-time lead. A controversial free kick against Tamara Luke late in the third quarter in the goal square, for supposedly holding the jumper, gifted Privitelli her third goal, and rounded out a match-winning performance.

How long does Cameron Smith have to wait before he becomes an Immortal?