Toby Greene has been elevated as a co-captain of Greater Western Sydney after the club decided the “moment of madness” that will see him suspended for the first five rounds of the new AFL season was outweighed by the benefit of his leadership skills.

Greene will join incumbent skipper Stephen Coniglio and Josh Kelly next year in a return to the three-captain model the Giants used in their inaugural season. 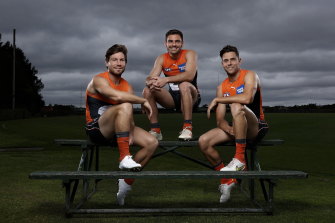 Toby Greene, Stephen Coniglio and Josh Kelly have been appointed as co-captains of the Giants.Credit:Phil Hillyard

Selecting the trio was an “exhausting” process, GWS head of football Jason McCartney said, which began a month ago with a detailed survey of players and staff crafted by the club’s high-performance and sports psychology unit – the results of which overwhelmingly determined that Greene, Coniglio and Kelly were the obvious candidates to lead the club, together.

The tricky part was parsing the results of the survey with Greene’s reputation as a firebrand, and the six-game ban he was hit with after making contact with umpire Matt Stevic in their elimination final win over the Sydney Swans, which some AFL pundits believed should have ruled him out of being a captaincy contender.

It means Greene won’t get the opportunity to lead the Giants in his new capacity as co-captain until round six, when they host St Kilda at Manuka Oval – one of home four matches the Giants will play in Canberra next season.

“There’s a lot of conversations around this one … this is the information, this is how we feel about him, but then there’s that moment. And that moment doesn’t go away,” McCartney said.

“We just kept coming back to, in the end, once again, the action of madness – we can’t condone that. But there’s so much [else] that he gives and is good about Toby. The punishment, to be honest – it was there when it happened and post. He’s got to live with that. It punished us as a group and it will for five games. I’m not sure that doing any more than that [helps].

“He’s got a bit of work still to do off-field to make sure it doesn’t happen again. And the indications through our survey were with our group, too – our group loves him, but they don’t condone what happened either, and that came out. We’ve had plenty of chats with Toby, we’ll share some of that information. He’s just got to work through it. But we still landed in a position where co-captaincy and that model, he’s a big part of.”

Coniglio has been GWS’s solo skipper for the past two years, and was determined not to share the role when he took over from Phil Davis and Callan Ward at the end of 2018. But the 27-year-old has struggled for form since taking on the responsibility while also dealing with a string of injuries that have kept him to just 23 games in the last two seasons.

“The feel of the group was it’s a big job and it needs more than one person to do it,” McCartney said. “He’s led quite well off-field, but I just think with Stephen being in the role, he has a greater appreciation of how big the role is too.

“I obviously had conversations with all three around the insights from the survey and what it was spitting out, and what were their thoughts, and their level of comfort about a model like this. And there was no hesitation at all from Stephen, Joshua or Toby.

“I think over the last couple of years, for Steve, there’s been challenges. He’s learned a hell of a lot. It’s been the on-field – he hasn’t got going for a variety of reasons, but your actions speak louder than words. This was an injury-plagued season for him but you can only control what you can control, and that so far is your off-season. When he returned on Monday he ran a 2km personal best. That’s pleasing signs early on.”