The Tigers, who lost Grimes to a hamstring injury in their round 14 victory over West Coast, believe Grimes has recovered well and is on track to be fit to play in what shapes as the most crucial game of their home-and-away campaign. 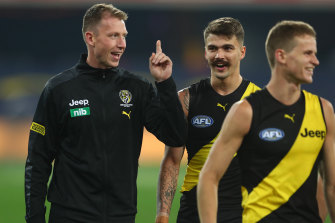 The inclusion of Grimes would be an enormous boost to the Tigers, given that they will not have regular full-back David Astbury. Grimes can help the inexperienced Noah Balta in his difficult assignment on Geelong's leviathan key forward Tom Hawkins.

Grimes has become Richmond's most important defender, with his ability to organise the defence, help out Astbury or Balta and the versatility that has seen him subdue both power forwards and the likes of Brisbane's gun small forward, Charlie Cameron.

His presence would be especially welcomed against the Cats, given Hawkins has been the competition's most dominant key forward over the the season, leading the Coleman Medal and playing at close to his career peak.

Astbury, who had minor knee surgery earlier this month, will not be available until round 18, the final round against Adelaide, at the earliest, though it is unclear whether the Tigers would bring him back for that game.

Gun midfielder Shane Edwards, who is in quarantine on the Gold Coast and training well, will play in the round 18 game, while Dion Prestia also could be available for the final round before the finals.

The Tigers need to beat the Cats to remain in the top four, assuming that West Coast defeats St Kilda this Thursday, while Geelong can secure a top four finish with victory over Richmond and enhance their chances of hosting a "home" final, albeit that qualifying final would still be in Queensland.

The Tigers have the vast bulk of their football department in Queensland and the COVID-19 situation in Melbourne also makes it easier for Stack and Coleman-Jones to return to their home states for a period while they serve the 2020 portion of their 10-match suspensions after they were arrested at 3.30am outside a strip club in Surfers Paradise on Friday morning.

The Tigers said the suspended pair would be required to pay the balance of the $100,000 fine from the AFL that has been imposed on the club – a position that the AFL Players Association and Stack's management oppose.