Payne Haas could be tempted to make a shock cross-code switch after receiving big-money offers to play rugby union in Europe.

Haas is contracted to Brisbane until the end of 2024, but his future beyond this season is clouded. The NSW prop sought a release from his Broncos contract in May after the club opted not to accept a proposal for a new deal that would allow him to leave if team performance targets weren’t met. The Broncos knocked the request back and the parties subsequently agreed to reconvene at the end of the campaign.

Arguably the best prop in the game, Haas is slated to earn $750,000 this season, $800,000 in 2024 and $850,000 the following year under the terms of his Broncos deal. The 22-year-old could command up to $1 million on the open market, although no NRL clubs could afford to pay him that much next year unless players were moved on to free up the required salary cap space.

However, there would be no issues earning a seven-figure annual salary in rugby, where cashed-up franchises in Europe could easily stump up the funds required. Several European clubs have already registered an interest should Haas become available.

Several union coaches have likened Haas to Billy Vunipola, the Saracens forward who has earned 64 Test caps for England. They believe the Kangaroos representative could make the No.8 position his own if he transferred to the 15-man game.

If rugby is a path he wants to pursue, it will spark further comparisons with his friend Sonny Bill Williams. There are already a number of parallels: both were considered the best young forward in the game when they made their way into first grade; both attracted attention for occasional transgressions off the field; and both then found the Muslim faith. 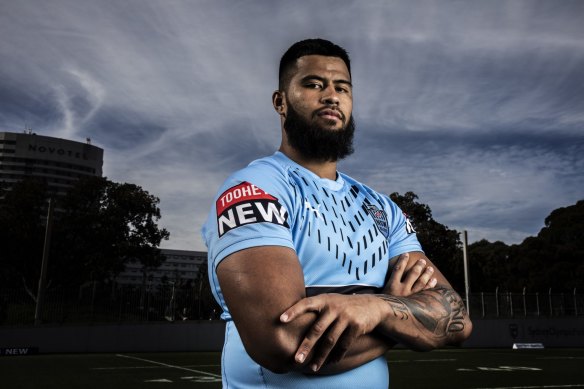 Blues prop Payne Haas is a man in demand.Credit:Jessica Hromas

However, Haas – who averages 168 running metres a game, more than any other prop in the NRL – is his own man. He hasn’t requested a release from the Broncos since the rugby interest intensified and may choose not to do so.

The former Australian Schoolboys star clearly has options should he wish to pursue another challenge or not come to terms to remain at Red Hill.

In the lead up to the State of Origin series, he flagged his intention to remove alcohol and gambling advertising from his jerseys in the future on religious grounds.

‘We could do it tomorrow if we wanted’: V’landys hits back as May return queried