Melbourne defender Joel Smith is poised to be a hard-luck story of preliminary final weekend after hurting his hamstring at Demons training in Perth on Tuesday.

Smith, 25, had slotted into Melbourne’s back line in round 22, keeping his spot for games against Geelong in round 23 and the qualifying final win over the Brisbane Lions at Adelaide Oval. 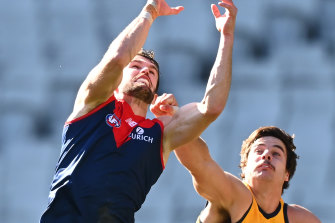 But Melbourne chief executive Gary Pert confirmed on Wednesday that Smith had been an injury concern following training and was in doubt for Friday night’s preliminary final against the Cats at Optus Stadium.

“We had a pretty big session yesterday, but I do know they’ll be looking at Smithy’s leg,” Pert said on SEN.

“The one thing we can do is we can be pretty conservative.

“We don’t have a view either way [on whether Smith will be able to play.]”

With Smith appearing likely to miss the game, the Dees have a bevy of options to choose from in taking his spot.

Veteran backman Michael Hibberd was an emergency for the qualifying final and would be somewhat of a like-for-like replacement.

Speedy defender Jayden Hunt has also worked his way back into the selection frame after recovering from an ankle injury, training fully in Perth on Tuesday.

Smith, the son of former Demons and North Melbourne high-flyer Shaun, has managed just 21 AFL games across five seasons, having been riddled with various injuries.

Former captain Nathan Jones has also been vying for a recall, but Demons skipper Max Gawn noted on Tuesday that it would be a bold call to make a lot of changes to a winning combination.

The Age Footballer Of The Year award: Round 17 Votes