Rival clubs have been put on notice of the potential availability of Essendon star Jake Stringer.

The former Western Bulldogs premiership player is in the final year of his four-year deal with the Bombers and the club and Stringer’s management are yet to have meaningful contract talks. 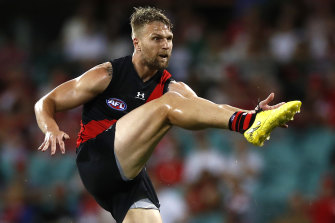 Jake Stringer is out of contract at the end of the season.Credit:Getty Images

To cloud matters, Stringer faces a month on the sidelines with a hamstring issue, meaning he won’t be back playing until past the halfway mark of the season.

Essendon have entered a difficult stage of list management, with the club attempting to regenerate its list while staying competitive.

The departures of key players Joe Daniher, Adam Saad and Orazio Fantasia helped the Bombers pick up three players inside the top 10 in last year’s draft. And despite sitting 15th on the ladder with a record of 2-6, the Bombers are playing exciting football and have a healthy percentage of 95.6.

Much of the focus this year has been on out-of-contract midfielder Zach Merrett, who has publicly admitted he is yet to decide whether he wants to stay at Essendon or chase success at another club.

Club sources have told The Age that Essendon want Stringer to stay, but for the right deal.

After a tumultuous ending with the Western Bulldogs, particularly between Stringer and coach Luke Beveridge, Stringer arrived at Tullamarine on a four-year deal worth just over $500,000 a season.

Stringer’s value as a player is difficult to quantify.

He burst onto the scene as a 21-year-old, booting 56 goals in his third season before backing it up with 42 goals in a premiership year.

Since arriving at Essendon, however, he has failed to emulate that form. 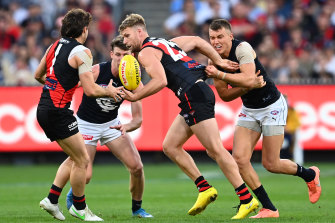 Jake Stringer is sidelined with a hamstring injury.Credit:Getty Images

He kicked 63 goals in his first two seasons at Essendon, playing all possible games but five.

Injury ruined most of his 2020 season and he was just starting to put together some exciting form this season before again being struck down by injury.

Over the course of his career, Stringer averages 13 disposals and slightly less than two goals a game.

He has failed to finish in the top 10 of the best and fairest in his first three seasons at Essendon.

At his best, Stringer is a brilliant player. He’s tough, he hits the scoreboard and he’s unique. But does he do it often enough to justify a long-term contract at more than $600,000 per season?

The Bombers have made no secret that they are trying to add depth to their midfield. They brought in Greater Western Sydney young gun Jye Caldwell – who has what appears to be a season-ending hamstring injury – and made a significant play at Bulldog Josh Dunkley, a situation that they are likely to return to.

While Stringer doesn’t fill that void as a pure midfielder, losing him would make him the third big-name forward to leave Essendon in two years after the departures of Daniher and Fantasia.

The evolving situation has pricked the ears of several rival clubs, however the Bombers remain in the box seat to retain his services.

The club also confirmed on Tuesday that small forward Irving Mosquito was on indefinite leave after returning home to family in Western Australia.

The 20-year-old is out of contract at the end of the season and club insiders believe a return to the club would be unlikely.